To celebrate the 50th anniversary of the James Bond films, the Barbican currently has an exhibition of artefacts and items from the series called Designing 007: Fifty Years of Bond Style. I knew I wanted to see this straight away, as I’m a big Bond fan. Happily, the exhibition is open late during the week. I went to the Barbican straight after work last Wednesday and as I  crossed the entrance threshold was greeted by this:

Because of the way the Barbican is laid out, the entire exhibition couldn’t be contained within one area, so you have to present your ticket to be stamped at the beginning of each section. The first time, your ticket is stamped with a zero. The second time, you also get a zero stamp, and the third time… well, you can see where this is going. 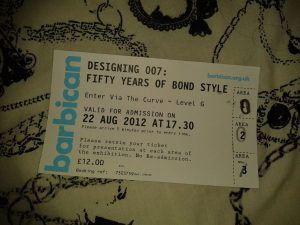 I loved the exhibition. It was expensive at £12, but there was lots to see – I was in there over an hour and a half. There were lots of artefacts and memorabilia on display, such as Oddjob’s hat, the golden gun, a fake golden ingot from Goldfinger, and Vesper’s necklace from Casino Royale. I loved the section on Q’s gadgets, which had, among other things, the little Snooper Dog from A View to a Kill. Screens overhead played video clips showing the items in action. There was a large costume display of original and reconstructed garments belonging to Bond and his friends and enemies, as well as numerous evening gowns worn by the women (including one from the as-yet-unreleased Skyfall). The displays spanned the entire half-century of 007: the bikinis of Ursula Andress and Halle Berry were displayed, as were swimming trunks belonging to both Sean Connery and Daniel Craig. I enjoyed, too, looking at the costume and set designs from the 1960s to the early 21st century, encompassing the different countries Bond visits.

Most of the exhibition was shown in the first section, while the second was devoted to the Bond villains. Bond villains have to be recognisably ‘other’: they need something that marks them out as different, such as a physical disability, a foreign appearance, or a ‘different’ style of clothing. This is obviously problematic and throws up the rather conservative and old-fashioned attitudes inherent in the franchise. This section was really interesting though and had some iconic objects on display, notably Rosa Klebb’s poisoned shoes shown in From Russia With Love.

The third section was the ‘Ice Palace’, which had as a centrepiece a model of the ice hotel from Die Another Day, with video clips of Bond’s various ski-ing-related exploits on the surrounding walls. Some of the stunts are pretty impressive.

I was planning on having a Martini in the specially-created bar; I took the lift to the first floor, went to the bar, saw that the cocktails cost eight pounds each, and went straight back downstairs again. I did, however, pick up this souvenir in the gift shop: 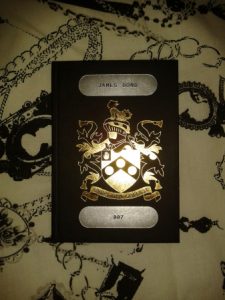 After the exhibition I wandered outside to find somewhere to eat my sandwich. I’d never been to the outside seating area, and though it’s a bit of a concrete jungle, I actually quite like it. 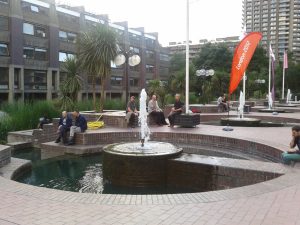 The Barbican is a theatre as well as an exhibition centre, art gallery and general Space Where Interesting Things Happen. I went to see a performance of the musical Carousel on the same evening (I wrote a review here). A very enjoyable evening was had altogether. 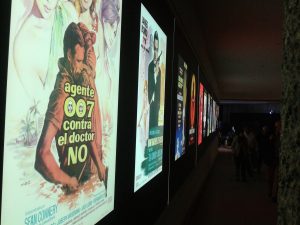