The new exhibition recently opened at Tate Britain, and it was one I knew I absolutely had to see. The exhibition was entitled Pre-Raphaelites: Victorian Avant-Garde, and as a huge fan of this particular band of artists, has been on my must-see list for months.

I arrived at the Tate on Saturday morning about an hour after the exhibition opened, and was shocked at the sheer number  of people there. I knew it would be popular, but I hadn’t realised just how popular until I got inside the first room. Though entry to the exhibition was timed, I felt that there were far too many people there: I had trouble getting close to the things I really wanted to see, and was repeatedly annoyed by people pushing in front.

Anyway, as far as the exhibition was concerned, I thought it was excellent. I know very little about art, but the Pre-Raphaelites have always appealed to me; perhaps my fascination was inherited from my mother, who studied art at college and who also likes their work. I’m also attracted by their pivotal role in Victorian culture, and the fact that they were influenced greatly by literature: some of my favourite writers, including Shakespeare and Tennyson, inspired the movement, and several members, including Dante Gabriel Rosetti, wrote poetry (his sister, who was not part of the group but who modelled for some of their pictures, was the famous poet Christina Rosetti).

The exhibition aims to emphasise the revolutionary nature of the Pre-Raphaelite brotherhood, whose members – as well as several followers – made a conscious effort to break with tradition and seek new ways of making art. While their works remain popular to this day, it is not always apparent just how radical their approach was; in fact, the Pre-Raphaelite movement has been described as the first modern art movement.

The exhibition was displayed over several rooms, each exploring a different aspect of the movement. The first room looked at the origins of the PRB and their influences. The movement was founded in 1848, and sought to recapture beauty and spirituality in a world undergoing industrial and social upheaval. Members were inspired by early Italian painters whose works were displayed in the National Gallery (painters who worked before the time of Raphael; hence the name of the brotherhood). Other influences included William Blake, whose works combining poetry and art inspired similar creations in PRB members, and other contemporary artists of the time.

Secrecy surrounded the brotherhood at first: early works were signed with the secret initials ‘PRB’; an example of this is Isabella by John Everett Millais, on display in this room.

The second room explored how the Pre-Raphaelites explored history in their work. Their style was realist, almost photographic in its detail, thus illustrating a historical subject with a modern sensibility. One of my favourite pictures in this room was painted by Millais, and shows a Highland woman welcoming her husband, who has just been released from prison where he was kept by the English after the Battle of Culloden. Another was William Holman Hunt’s impression of the scene in The Two Gentlemen of Verona (the group was frequently inspired by Shakespearean scenes) in which Valentine rescues Sylvia from Proteus. I also liked the fact that some of Elizabeth (‘Lizzie’) Siddall’s watercolours were shown here. Most often remembered for her tempestuous and doomed relationship with Dante Gabriel Rosetti, and for being the model for Ophelia in Millais’ painting, her pictures showed that she was a talented artist in her own right. 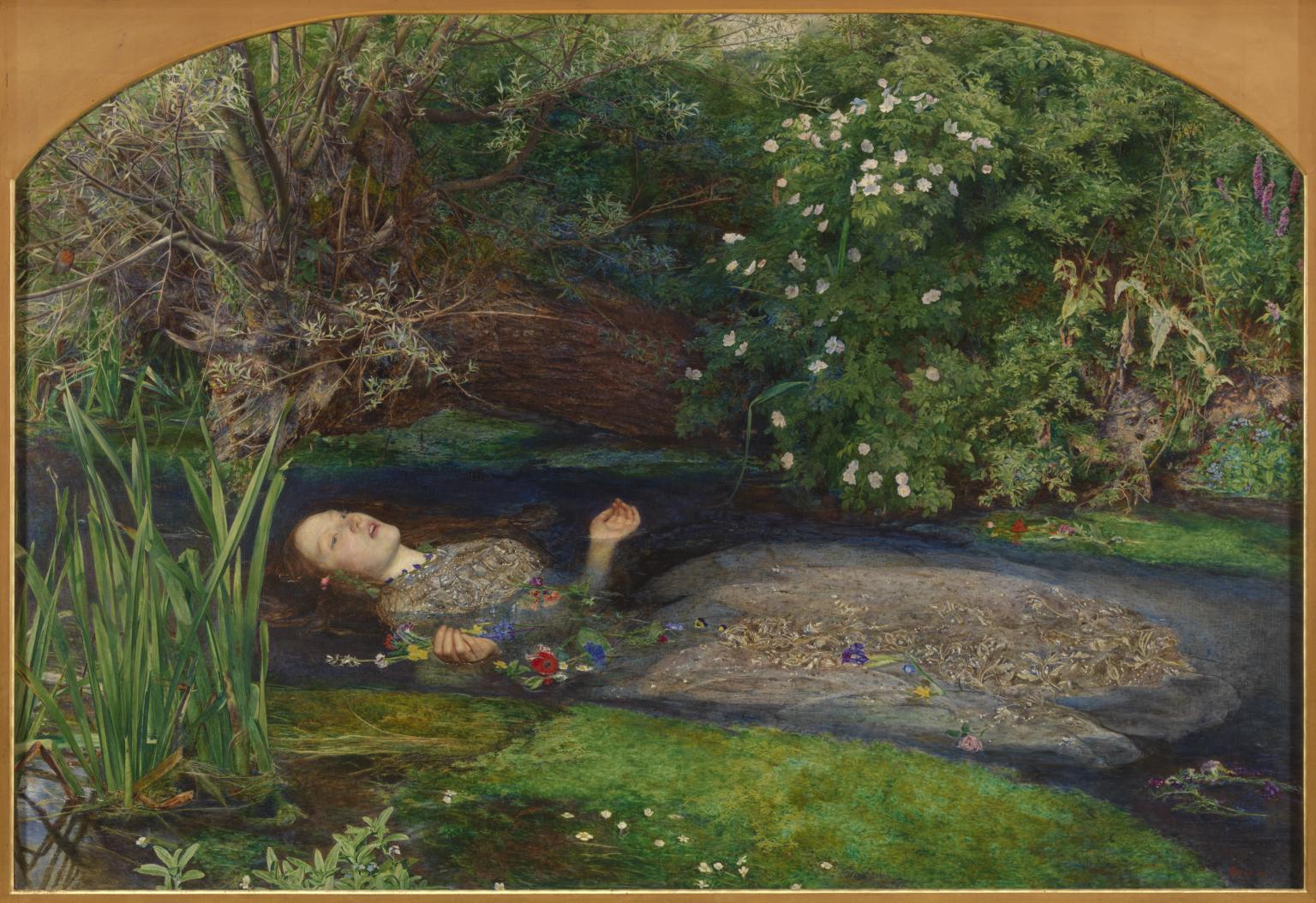 The ‘Nature’ room contained many beautiful paintings, including Ophelia, mentioned above, which is one of my favourites; the colours are so lustrous and the water and the greenery captured so perfectly. Lizzie Siddall spent days lying in a bath of water in order to model for the doomed heroine. Other pictures were of landscape scenes, bright and summery or bleak and bare. I don’t normally associate the Pre-Raphaelites with landscapes so this section was a revelation for me. A particular highlight was Ford Madox Brown’s An English Autumn Afternoon showing the view from Hampstead towards London. I’ve seen this view myself but it looks very different nowadays: I enjoyed seeing what it was like a hundred and fifty years ago.

The photographic quality of many of the Pre-Raphaelites’ works is perhaps most evident here. Some critics accused them of working from photographs but in fact this was not the case: they would generally paint the landscapes outside during the summer (years before the Impressionists began to do the same thing) and retreat to their studios in the colder months to add figures and finish off the works. Their accurate, realist style was hugely modern and different from anything which had gone before.

The next section explored salvation, religion and social attitudes. The nineteenth century was a time of great change, with the publication of Charles Darwin’s theories, social conflict and division. The Pre-Raphaelite brotherhood sought to make Christianity accessible to all, portraying religious figures with naturalism and compassion. Millais’ Christ in the House of His Parents was a revolutionary work, showing the Holy Family as ordinary working people: he made studies for the painting in a real carpenter’s shop. Hunt, one of the more religious of the Pre-Raphaelites, made the pilgrimage to the Holy Land so that his work would be more authentic: he completed several important works based on his experiences there, including The Scapegoat, which illustrated an old Biblical legend in which a goat, bearing the sins of the population, is expelled from a village. The group’s portrayal of women was in some ways radical for the period, but in others encompassed Victorian ideals – unsurprising considering that all its members were male. In Hunt’s The Awakening Conscience, a woman comes to the realisation that her way of life – she is a kept woman – is wrong. On the one hand, Hunt does not judge her for her lifestyle; on the other, there doesn’t seem to be any issue with the morality of her lover’s chosen way of life.

Another room explores the representation of beauty in Pre-Raphaelite works. In around 1860, some members of the movement began to explore the idea of ‘art for art’s sake’, presaging the Aesthetic Movement. Dante Gabriel Rosetti in particular embraced this theme, painting numerous images of beautiful women gazing out of their pictures and wearing rich robes of varying hues. This was probably my least favourite room of the lot: I like pictures to have a bit of meaning behind them, and the cynic in me believes that Rosetti’s desire to paint nothing but beautiful women stemmed from more than an artistic theory.

The Paradise section explores other art forms rather than painting: tapestries, furniture and textiles are among the pieces shown here. William Morris, inspired by the Pre-Raphaelites, set up a firm to produce items such as textiles, furniture, stained glass and tiles that were both beautiful and functional. Several members of the PRB were involved in this enterprise in the early stages. I found these items interesting to look at although I must confess that I prefer the paintings.

The final section explored mythologies and their role in inspiring Pre-Raphaelite painters. Greek and Roman myths as well as legends and stories from literature were covered here. Edward Burne-Jones’ picture King Cophetua and the Beggar Maid is a striking example of this, dramatic and detailed.

I spent two hours in the exhibition, and felt slightly exhausted by the end. However, I thoroughly enjoyed myself and really appreciated the chance to learn more about a movement in which I am very interested.