I am a massive geek when it comes to the Tube and I am trying to visit every station on the London Underground map. The London Transport Museum has an events page which I check regularly and I was thrilled to see that they were opening up Aldwych Station, closed since 1994, for tours. I didn’t have to go alone – a couple of my friends were interested in visiting too. We queued up outside the station entrance last Friday night – a bit different from our usual end-of-week shenanigans. 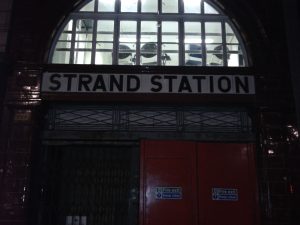 The station, on the corner of the Strand and Surrey Street, was named Strand when it first opened in 1907 but renamed Aldwych in 1915 when another station (which later became Charing Cross) was given the name of Strand. The Aldwych name was printed on a canopy extending from the front of the station, which was removed when it closed: this is why the station façade bears the name Strand.

The station was doomed from the beginning: when the Piccadilly Line was created by the merger of two separate projects, Aldwych was left as a single station on a short branch south from Holborn. Though it had two tunnels, only one was generally operated as a shuttle service; it was rarely crowded even during rush hour, and from 1917 was closed every Sunday. The second tunnel was bricked up during the First World War and used as secure storage for National Gallery paintings. 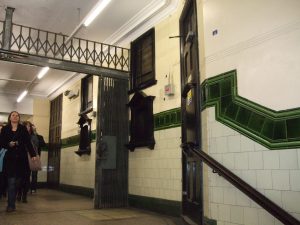 The light use of the station was such that in 1922 the booking office was closed and tickets were sold from booths inside the lifts. In 1958 the line was used only during rush hour, and in 1994 the station was closed to the public for good, owing to the prospect of replacing the ageing lifts: London Underground felt that the cost could not be justified. An extension of the line to Waterloo station was proposed on several occasions but was rejected each time owing to complicated political reasons. I feel this is a shame as if this had gone ahead I’m sure it would have been well-used. 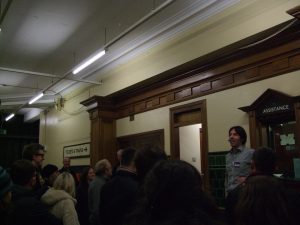 I was fascinated to learn about the history of the station during the tour. We began by meeting in the booking office, where one of our guides gave us some background information and pointed out some features of note. The ticket office itself was built in the 1980s as part of the upgrade to the ticketing system, however other ticket booths were original ones and much of the tiling and flooring dates from 1907 when the station was built. The wash basin in the ladies’ bathroom is also, apparently, an original one, and I was impressed by the Art Nouveau designs above the lifts. 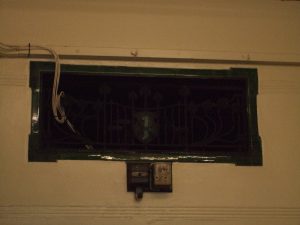 After the short talk we were given a little time to look around and take photographs, a procedure which was repeated at each point on the tour. After this it was time to make our way downstairs. Long-time users of the London Underground will probably be familiar with the seemingly never-ending spiral staircases built into stations such as Covent Garden and Goodge Street. This staircase was similar but it didn’t seem to take nearly as long to reach the bottom, perhaps because I was excited about the tour!

Our second stop was by the lifts. Six lift shafts were – inexplicably, according to our guide – installed, but only two lifts were ever actually built. You can look through the railings at the dark, deep lift shafts: I found this rather spooky. 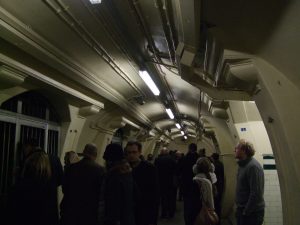 Next, we visited one of the platforms. This platform was in use as a shuttle service up until the closure of the station in 1994. A working Tube train still exists on the line. This platform is frequently used for filming, owing to its old-fashioned look and feel. The original tiles still exist, though have in some areas been painted over. Movies set in the mid-20th century are those most commonly filmed here, such as Atonement (2007) and The Edge of Love (2008). Contemporary films tend to use the old Jubilee Line platforms at Charing Cross, as they were closed more recently and therefore have a more modern appearance. Our guide told us that the posters on the wall, as well as the picture of the Tube map, were not original and were actually put up for filming. 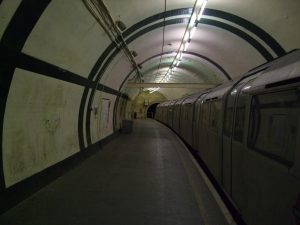 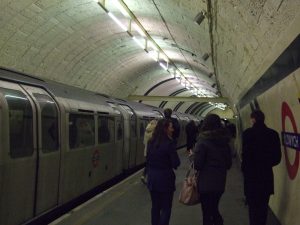 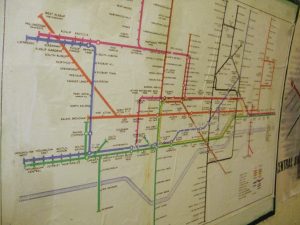 The station was used as a shelter during World War II and played host to a large number of people. The poor facilities gradually became replaced with chemical toilets and metal bunks, and a canteen, first aid post and a library were installed. Entertainment was put on for the benefit of the shelterers and church services were even held on Sundays.

Our final stop was at the other platform, which was bricked up and used as storage during World War I. It was used for the same purpose during the Second World War, when the Victoria and Albert and the British Museum moved many valuable artefacts down here, including the Elgin Marbles. The tiling on this platform is unfinished, suggesting that heavy use of the station was not anticipated even when it was first built. The original track, including wooden sleepers, is still in place here. Filming has taken place on this platform too, and some of the posters were put up for this purpose. Others, however, were placed here to test out new forms of paste before using them on the rest of the Tube: as our guide pointed out, since some of the posters have been here since the 1970s, the paste must have been effective!

This platform has also been used to test designs for other London Underground platforms, including the new Victoria Line in the 1960s, and the refurbishment of Piccadilly Circus in the 1980s. However, the original Strand station name can still be seen on the tiling behind the posters.

After the tour, we headed back upstairs and were given mulled wine and the chance to hear the TfL Choir in action. They sang classic music hall songs including ‘Daisy Bell’ (1892) and ‘Let’s All Go Down the Strand’ (1904) as well as several Christmas carols. 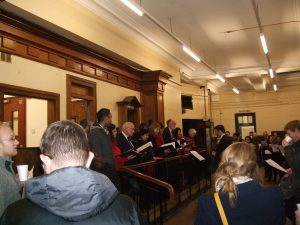 I had a brilliant time on the tour and I’m really glad I went. I feel it was worth paying the extra £5 for an evening tour (the daytime tours cost £20, the evening tours £25) for the mulled wine and the concert. Further visits to the station should be posted on the London Transport Museum’s events page, which I recommend keeping an eye on. 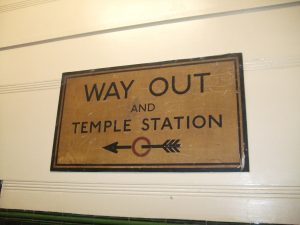 Thanks to the tour guides, many of whom are volunteers, for their knowledge and enthusiasm. I would like to credit the Aldwych: The Secret Station booklet handed out at the end of the tour for providing me with extra snippets of information which I used in this post.

3 thoughts on “Hidden London – Aldwych: The End of the Line”