I’ve already written about Ramin Karimloo on this blog – the singer who I got to know in his West End roles as the Phantom in The Phantom of the Opera and Jean Valjean in Les Miserables, and who has been touring for several months with his own material and and a few covers. He is also part of a musical duo with Hadley Fraser, another West End star who played Raoul in the 25th anniversary production of Phantom at the Royal Albert Hall, and Javert in Les Miserables alongside Ramin. On Sunday I went to see the two of them play the main stage of the St James Theatre in west London. 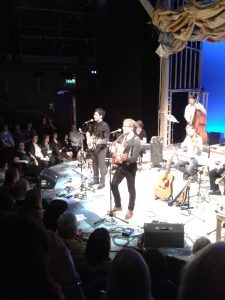 I generally like pop music which tends to be performed in huge arenas, so it was a nice change to experience such a small and intimate atmosphere. Ramin and Hadley were so friendly and funny and had brilliant banter between themselves and with the audience – at one point Ramin even pointed out his kids, who were in the audience with his wife, as the youngest had gone to sleep – so sweet! There was a brilliant atmosphere, laid back, relaxed and cheerful. 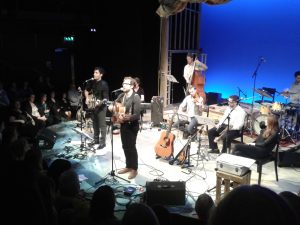 I enjoyed the music, which was a mixture of covers and original songs that tended towards folk, country and bluegrass. None of these are styles of music I’d normally enjoy, but my obsession with Ramin has introduced me to many songs I wouldn’t otherwise have listened to! I have to say, I do think Ramin is the more talented of the two. He has a really distinctive voice and his songs were stronger. I don’t want to offend any Hadley fans, but although he is clearly a lovely and talented guy, I didn’t think his voice was particularly distinctive and his songs weren’t as good as Ramin’s, in my opinion. Having said that, the two of them made a great pairing: they obviously get on and they sing and perform very well together.

I had a very busy and tiring Saturday. I visited 11 tube stations. Eleven! And they were all in east London, most of them on the Central Line.

My travels took me through Leyton and Leytonstone up to Woodford and Snaresbrook. The most notable part of my journey was seeing the Hitchcock mosaics at Leytonstone tube station. Director Alfred Hitchcock grew up in the area and a few years ago several mosaics picturing scenes from his films were installed in the corridor leading to the ticket hall. I had fun trying to guess which film each mosaic represented.

On Friday night I paid a visit to the Royal Academy of Arts to see the Constable, Gainsborough, Turner and the Making of Landscape exhibition. I love Turner and this was the main reason for my visit. In the end there wasn’t a great deal of his work on display, or that of the other named artists. A lot of the space was devoted to artists who paved the way or who were inspired by these three giants, so I felt the title of the exhibition was slightly misleading. Still, the paintings and artefacts displayed were well-chosen and the exhibition as a whole was small enough to be enjoyed without fatigue. Highlights for me included Turner’s Dolbadern Castle, while paintings by Gainsborough and Constable, artists I’d never paid much attention to in the past, appeared in a new light for me and I think I’d like to find out more about their work.