I visited the small British Optical Association Museum (also known as the musEYEum – see what they did there?!) and was surprised that it was so central: just round the corner from Charing Cross, within the College of Optometrists building on Craven Street. Curator Neil Handley who showed me round suggested that it was the most “centrally located museum in London”. The museum has the world’s oldest collection of spectacles and vision aids. 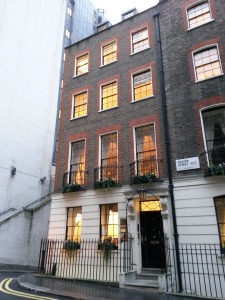 An optometrist is someone who specialises in eyes: they undertake eye examination and sight testing, advise on visual problems, prescribe glasses and contact lenses, and dispense certain ophthalmic drugs. The College of Optometrists is a membership organisation which aims to raise the standards of optometric education and support members in their professional development.

The British Optical Association Museum was founded in 1901 by J.H. Sutcliffe (1867-1941), an optician and administrator who ran the Museum for the first forty years. In common with other medical professionals in the nineteenth century, optometrists sought to be respected as the educated and skilled practitioners they were, and founded the British Optical Association in 1895. The Museum was created to emphasise the long and distinguished history of the profession, and became part of the College of Optometrists when the BOA was disbanded.

The museum has a rich and varied collection consisting of anything and everything to do with eyes, glasses and contact lenses. It has a pair of glasses belonging to Dr Johnson, and another from the Coronation Street character Deirdre Barlow; pairs made for Johnny Depp and Angelina Jolie for the film The Tourist, as well as contact lenses worn by Leonardo Di Caprio (The Beach) and Matt Le Blanc (Lost In Space); not to mention other assorted bits and bobs including a miniature opticians’ shop from a model village, and a Halifax money box featuring Howard Brown, the bespectacled one-time face of a major ad campaign. One of my favourite things was a little pair of “pecktacles” designed for chickens.

One of the oldest items in the collection is a statue of Saint Odilia, in which eyes are carried on a Bible: churchgoers would pray to the statue in hope of relief from eye disease. Another is a small statue showing a wearer of early glasses. The history of spectacle design is a fascinating one: they began as two lenses pinched on the bridge of the nose (as shown in the old statue) and did not get side pieces until the early eighteenth century. The oldest pair of glasses in the Museum’s collection dates from 1550-1650, and the earliest pair with sides dates from 1728-30. Glasses aficionados can find much to interest them in the museum: lots of different styles fashionable throughout the ages are on display, including the notorious NHS glasses that seem to have made a comeback in recent years. Some modern glasses even have 3D-printed frames.

At one time tortoiseshell (or turtleshell) was a particularly popular material for spectacle frames: it was flexible but reasonably sturdy, and it was also attractive (not so good for the poor turtles though). As opticians didn’t want to be seen as retailers, they disliked displaying glasses frames in their windows, so stuffed turtles were often used instead (at least until the turtle became a protected species) and turtles became a kind of symbol for the optician. I wonder if this is why my contact lens solution from Specsavers has a picture of some turtles on the front?

There is an interesting display on how glasses are designed and made, and another section featuring various bits of eye testing equipment used over the years. I didn’t find these as frightening as the old equipment from the British Dental Association Museum – in fact, variations of the alphabet displays used to test eyesight are still in use today.

As well as the usual vision-correction spectacles, there are other kinds of glasses on display, including Eskimo snow glasses designed to protect eyes from the glare of the sun on snow, and different kinds of sunglasses. Interestingly, early sunglasses used green or blue glass, never black, as this shade was associated with the glasses worn by the blind. “Make-up glasses”, designed so that one lens can be lowered to allow the wearer to apply mascara, are also displayed, as are false eyelashes and even eye make-up.

Other things on display include telescopes, opera glasses, spy glasses and binoculars, as well as some very interesting fans with tiny telescopic lenses in the centre. Early contact lenses are also included: fascinating to me as a contact lens wearer, they made me feel incredibly thankful that I live in the twenty-first century. The earliest contact lenses were huge, covering the entire eye, and they could only be worn for two hours at a time.

Sometimes eyes became diseased, and had to be treated: eye baths were designed to allow the user to wash out the eye with water or another solution, and there are several examples here. If the worst came to the worst and the eye had to be removed, one could wear an eye patch (like a pirate – there is a pirate mug on display) or choose a glass eye. The earliest artificial eyes were Egyptian, and were given to the dead to allow them to “see” in the afterlife; centuries later, the living could choose from a “chocolate box” of glass eyes, selecting the most appropriate match. Nowadays, of course, an artificial eye is individually made for each person.

The British Optical Association Museum is fascinating and it’s well worth making an appointment to visit. If you wear glasses or contact lenses it’s particularly interesting, and I for one am extremely thankful for optometrists and all the work that they do, and have done in the past. If you are unable to visit, or want to get a feel for the kind of objects they have, you can view the collection online.

Opening Hours: By appointment only, during the week: book via phone or email