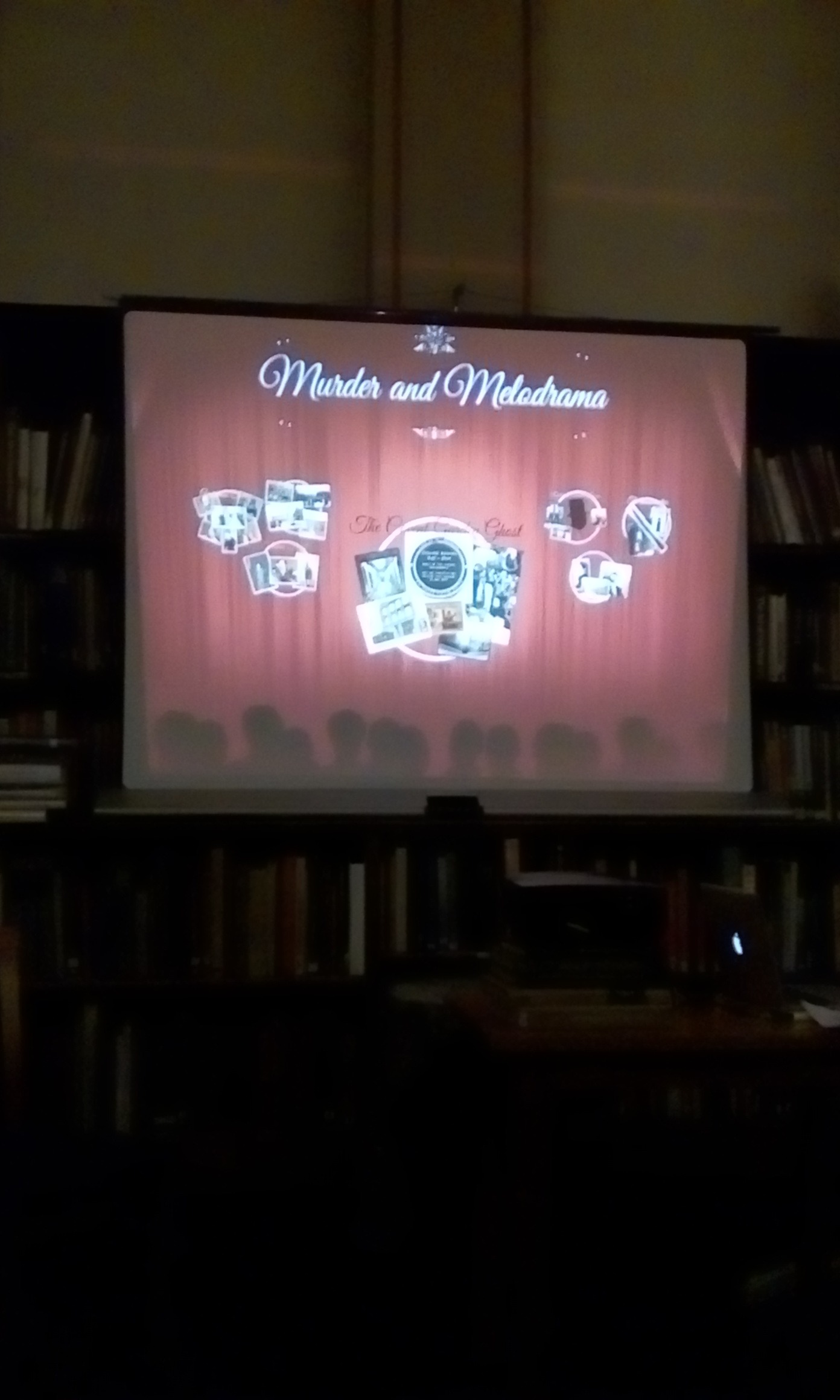 Salon for the City is a series of events taking place in London, covering various historical and cultural topics. I attended Salon No.43: London Murder and Melodrama (The Theatre of Death), held at Westminster Arts Library. The ticket included gin, which is always a bonus.

This particular talk was delivered by actor and writer Julie Balloo, and was concerned with the murder of actor William Terriss outside the stage door of the Adelphi Theatre on 16 December, 1897. It began, appropriately enough, with a scene from a Victorian melodrama, and then went on to discuss the histories of the key players in the tragedy.

Terriss was born William Charles James Lewin on 20 February 1847. His family did not want him to become an actor, so he originally pursued a variety of different careers: he joined the Navy, became a tea planter in Bengal, and tried sheep farming in the Falklands. He also tried breeding horses in Kentucky, and married Isabel Lewis (stage name Amy Fellowes) in 1870, but he still had ambitions to go upon the stage.

During the 1870s he established his acting career and performed in many popular plays of the period. His first big role was alongside Ellen Terry and he also got on well with Henry Irving, famous actor-manager of the Lyceum. In 1885 he met actress Jessie Millward and embarked on an affair with her that lasted until his death. Terriss was liked and admired by both fellow actors and the general public: he was known to be extremely generous to the former, and was hailed as a hero by the latter when he saved some people from drowning. The New York Dramatic Mirror described Terriss as one of the most popular actors in England, second only to Henry Irving. Supposedly, Terriss was told by a palm reader that he would die a violent death; his mistress Jessie Millward also had threatening dreams.

His murderer, Richard Archer Prince, was born in the slums of Dundee and grew up in abject poverty. He loved the theatre, and had ambitions to become the ‘Terriss of Scotland’. Prince moved to London and got an agent, but never managed to gain the same level of success as his hero. Terriss had assisted the struggling young actor in finding work, but over the years Prince took to alcohol abuse and grew increasingly unstable. Terriss sent several sums of money to Prince via the Actors’ Benevolent Fund, and continued trying to find him acting work, but on one occasion when Prince was refused money from the Fund, he blamed Terriss.

Prince bought a knife from a shop on Brompton Road and headed to the Adelphi Theatre. He waited in a doorway for Prince to arrive. Jessie Millward, who was in the same play, arrived first and Prince gave her a scare. When William Terriss arrived, Prince stabbed him, twice in the back and once in the front. Terriss died shortly afterwards.

Prince loved the attention he got during his trial at the Old Bailey in 1898. He was pronounced guilty, but insane. He was sent to Broadmoor and became quite involved in the dramatic scene there, putting on plays for the inmates and acting as the conductor of the prison orchestra until his death, which occurred in 1936. An interesting footnote to the story is that the ‘Covent Garden Ghost’ is supposed to be William Terriss. The ghost haunts Covent Garden station, which sounds strange until you learn that there used to be a bakery on that site, much frequented by the actors.

Thus concluded the first half of the Salon for the City event. The second involved the performance of certain scenes from Balloo’s play Gods of the Adelphi, which were entertaining and made me want to see the full play. Another dram of gin was served, and the evening drew to a satisfying conclusion.