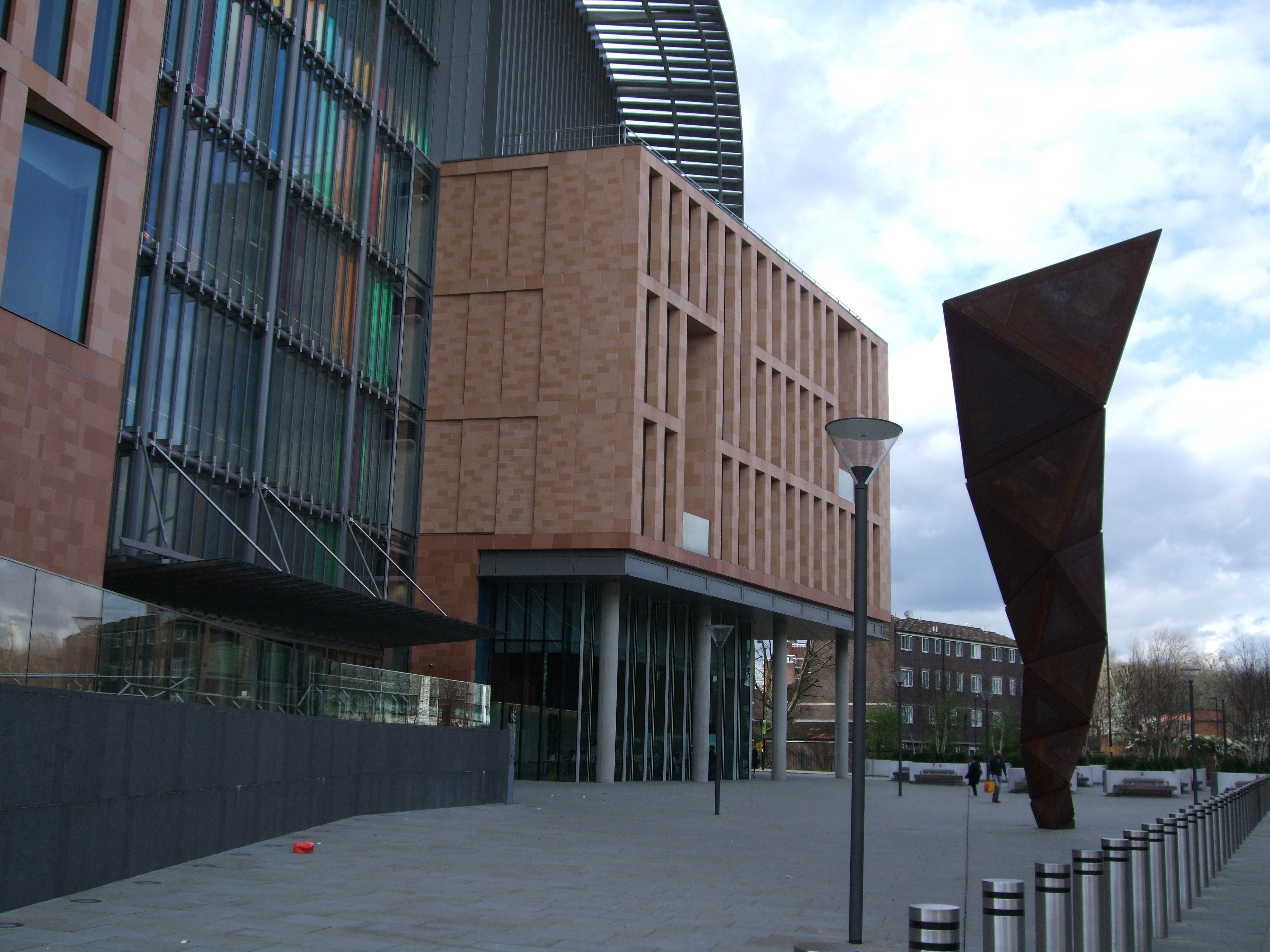 On a day off from work I visited the recently opened Francis Crick Institute, located next to St Pancras station, to see the first public exhibition, How do we look? Exploring the scientific gaze at the Crick. The Institute is the largest biomedical library in Europe, and the exhibition looked at some of the images created by research scientists at the Crick in order to help solve scientific problems.

The images had aesthetic value in themselves, being, on a shallow level, fascinating and beautiful. The actual science I must confess is a bit beyond me, but I thought the exhibition did a good job of making the theory behind the images as accessible as possible. If nothing else, it certainly served to increase my respect for the cutting-edge scientific research being undertaken here. 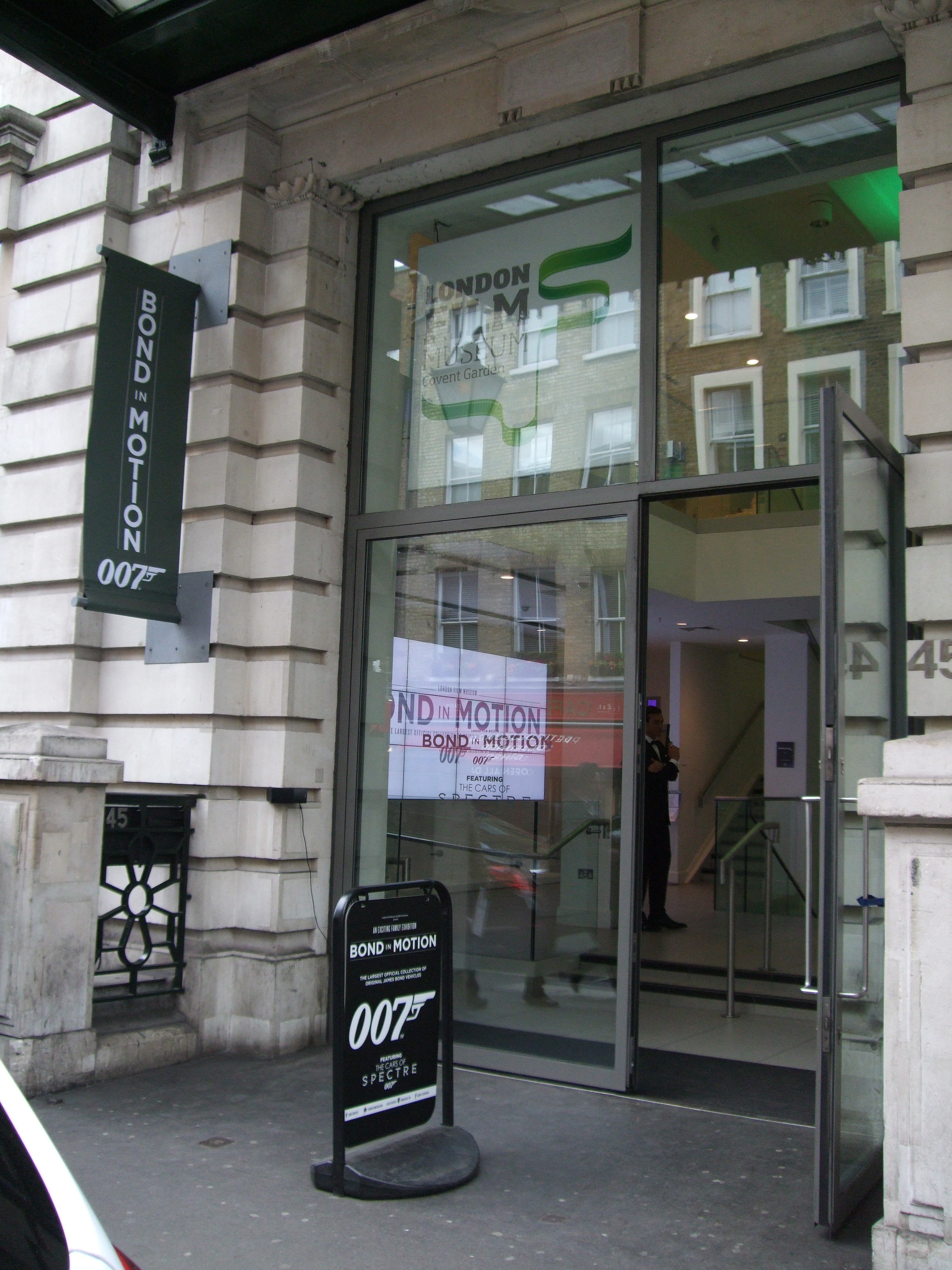 It might sound weird but I am a really big James Bond fan. When I was younger I watched all the films and I still go to the cinema every time a new one gets released. I’m certainly not immune to the franchise’s flaws, but it doesn’t stop me enjoying a bit of escapism.

The London Film Museum – not a place I’d ever been aware of, although it’s been in its present location in Covent Garden since 2012 – is currently dedicated to a Bond in Motion exhibition, showcasing many of the vehicles from the James Bond films. It’s been on for a while, but I’m glad I waited until now to go, as it now has a selection of vehicles from the latest film, Spectre. To be honest, the exhibition shows no sign of leaving, and it wouldn’t surprise me if it eventually contained vehicles from whichever Bond film comes next.

As you enter the exhibition you can see Little Nellie, the helicopter from You Only Live Twice, hanging from the ceiling. A small exhibition space on the mezzanine contains diagrams and other memorabilia, but its when you take the lift down to the basement that the exhibition proper really begins.

There are many, many vehicles on display: mostly, but not exclusively, cars. They span the whole half-century of Bond films. Some have damage that was caused by stunts used in filming.

Information panels explain the statistics relating to each vehicle: I confess I didn’t pay much attention to these. Of more interest were the short film clips demonstrating each car in action.

At the end of the exhibition there is a cafe and a small gift shop. You exit into Covent Garden, right beside the London Transport Museum. The cafe is open to all: it might be a good refreshment option if you’re passing through the area and all the cafes are really crowded.

Obviously, Bond in Motion is going to appeal more to those who love cars. I’m not one of those people, but it was nice to experience a bit of escapism and relive some of the fun moments from the Bond films. The exhibition is pretty pricey, but look out for offers: I got mine through Living Social.

The Adventures in Moominland exhibition at the Southbank Centre, introduced as part of the Nordic Matters festival, has been so popular that it has been extended by several months (it’s now on until 20 August), but when my friends and I booked our tickets we didn’t know that, and all the adults-only slots had sold out. As it turned out, though, our group consisted of only adults in any case.

The Moomins certainly transcend age. I wasn’t a particular fan as a child, but I’ve been reading the books recently, and the combination of gentle humour and wry observation have made me into a fan.

The exhibition, which begins at the Southbank’s Spirit Level, is really more of an immersive tour into the world that Tove Jansson created in her Moomin stories, featuring various environments from her works and the inspirations for them, arranged in a roughly chronological order. You get to see original Moomin pictures from Jansson’s archive, and hear narration by Sandi Toksvig. Our guide was incredibly enthusiastic, taking us deep into the world of Moominvalley, a place one of us quite wanted to leave.

Whether you’re a young or an old Moomin fan, check out this exhibition. It’s an unforgettable experience.

It’s time once again for my monthly jewellery brand, and this month I’m celebrating:

Like many awesome modern retro-style jewellery brands, Revere Folie is from Australia and is, in fact, mother to the sisters responsible for the amazing brand Deer Arrow. Whereas Deer Arrow specialise in brooches, Revere Folie is all about the earrings.

These Art Deco-style earrings are stunning.

As a huge Wizard of Oz fan, these gorgeous hoops are at the top of my list.

Or at least, they would be if it wasn’t for these adorable penguins.

These moons are simple, but still make a statement.

Recently the brand has begun to diversify into necklaces: I love this gorgeous wolf and moon one.

Check out Revere Folie by visiting:

Last time my mam came down for a visit, she asked if we could go to Dennis Severs’ House, recommended by a family member. I said yes: it’s somewhere I’d been meaning to go for a while.

We found the house easily, not far up from Liverpool Street Station. There was a short queue outside, but it wasn’t long before we were let in. We paid our entrance fee and were given a short introduction.

The house was created by the artist Dennis Severs, who lived in the house in the manner of the original eighteenth century occupants. He later opened the house to visitors. The idea is that you step back in time and interrupt a family of Huguenot silk weavers called Jervis. As you enter each room you get the impression that they have just left; the sights, sounds and smells stimulate your senses and bring the experience to life.

It’s certainly a unique experience. You walk around in silence, absorbing the atmosphere. No photos are allowed, understandably. I won’t describe the house in detail for fear of spoiling the surprise, but it has all the usual rooms that you might expect: kitchen, sitting room, bedroom, even a ramshackle attic.

My criticism is that the repeated instructions, dotted around the house, are rather patronising. Visitors are constantly told what they should be doing, thinking and feeling and I don’t particularly like being told what to do. It got my back up and didn’t exactly put me in the right frame of mind. Also, I kept spotting things in the rooms that shouldn’t have been there – an Elizabeth II-related artefact in the Victorian room and some distinctly modern alcohol bottles in the front room. I don’t know if these were left over from some event or other, but they didn’t exactly fit with the atmosphere.

Having said that, Dennis Severs’ House is certainly an unusual experience, and it’s well worth taking some time out to pay it a visit. 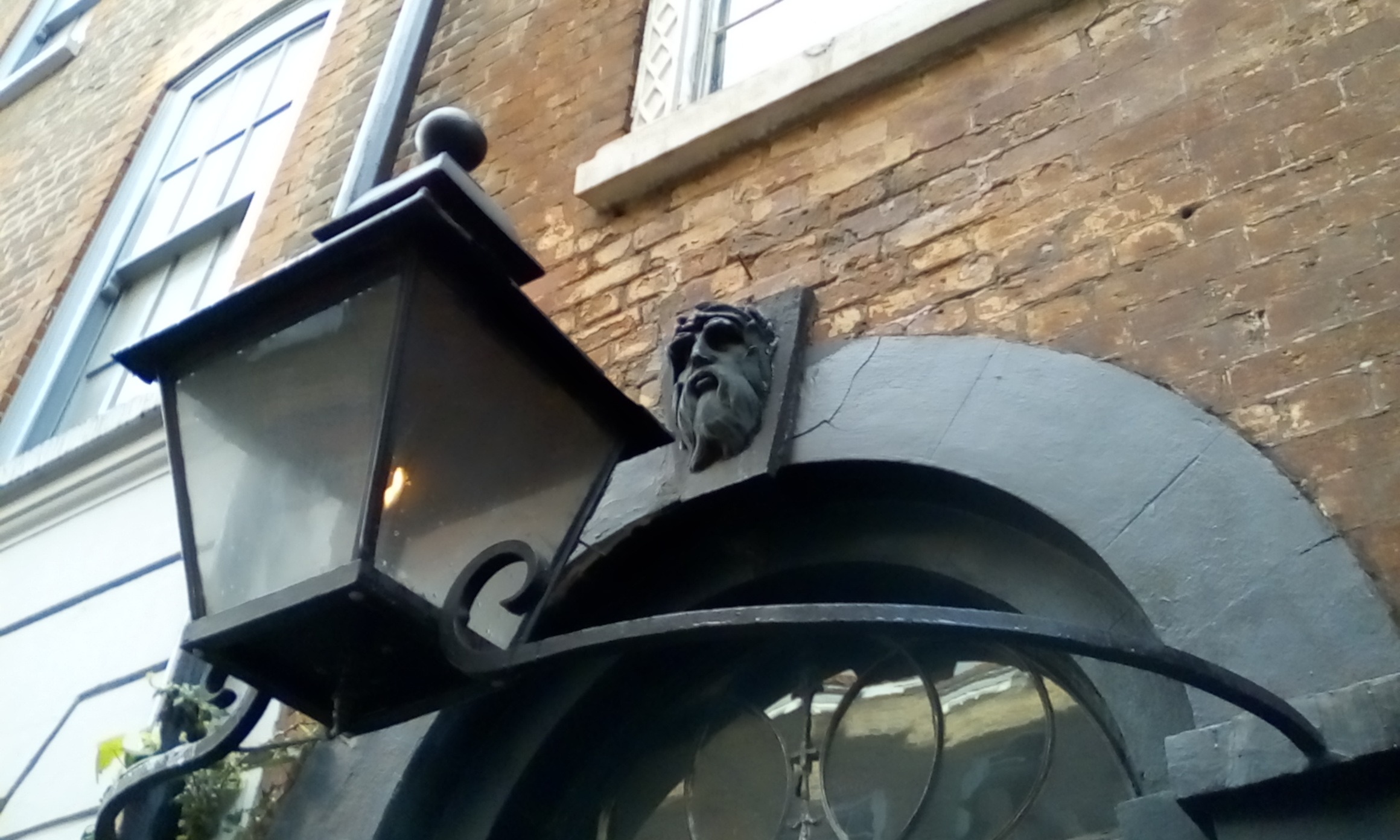 Opening Hours: No booking required on Sundays and Monday lunchtimes; evening slots are bookable in advance 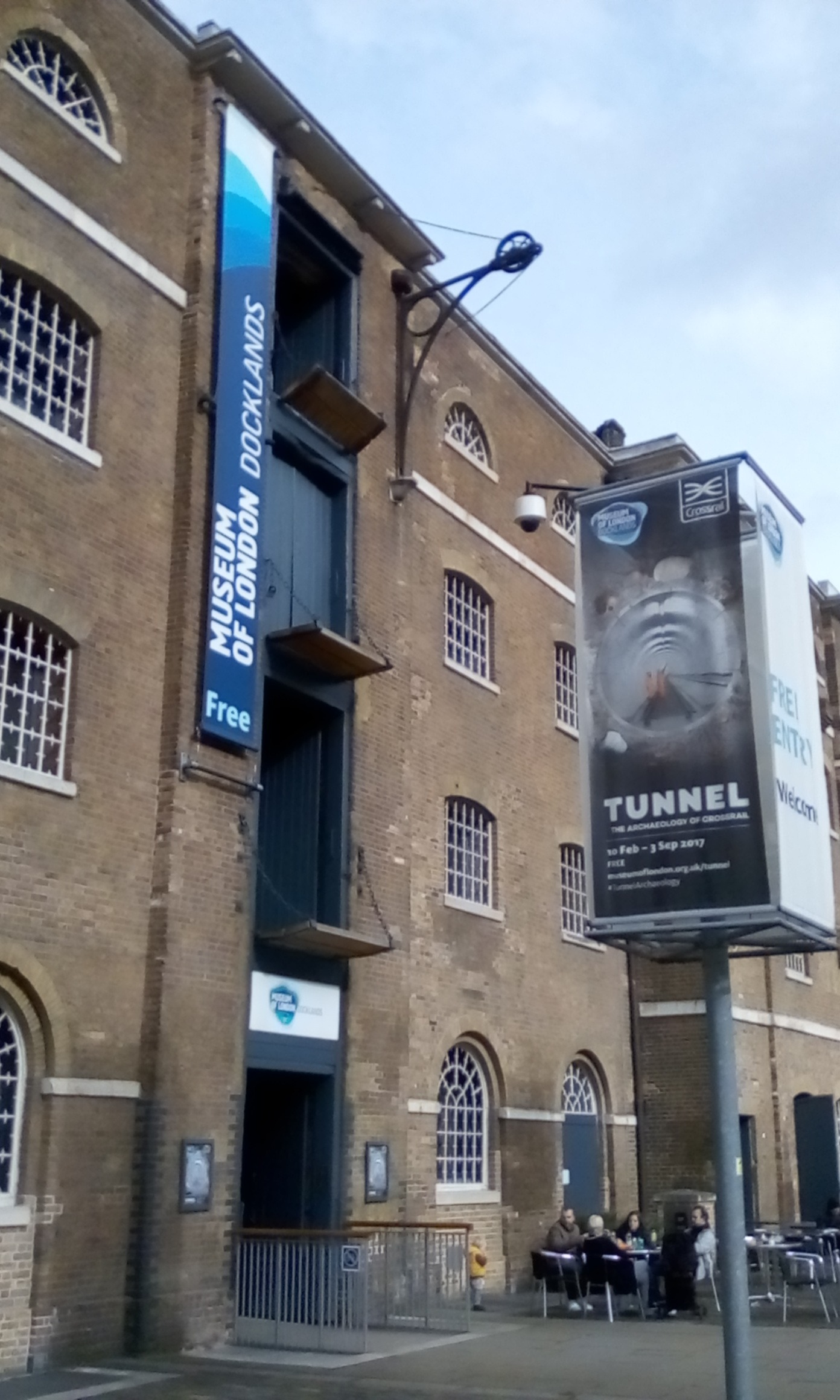 When my mam came to visit me in London, I decided to take her to visit the Tunnel: The Archaeology of Crossrail exhibition at the Museum of London Docklands. The Crossrail tunnel, due to open in 2018, is the largest engineering project in Europe and its construction has provided archaeologists with a unique opportunity to excavate a huge stretch of London, encompassing thousands of years of the capital’s history. Curator Jackie Kelly has described it as the “biggest piece of London archaeology ever” in terms of the project’s sheer scale. The initial results of the excavation are being presented in Tunnel.

The objects on display in the exhibition range from reindeer bones gnawed by wolves 68,000 years ago to flakes chipped from a flint axe 8,000 years ago, from victims of the Black Death to Victorian chamber pots and Crosse & Blackwell marmalade and pickle jars. One skeleton is particularly poignant as it is of a Roman woman whose skull was buried between her legs. A large pot, full of cremated human bones, dropped out of the roof of one of the tunnels, but was luckily caught by a member of the tunnelling team.
Another fascinating item is a leather shoe dating from the fifteenth or sixteenth century.

My favourite items from the exhibition came right at the beginning and right at the end. As you enter the exhibition, you see a statue of St Barbara, patron saint of artillery, explosives and mining. She was originally installed at the entrance to the tunnel and workers liked to touch her as they ventured underground at the start of a shift. I like her because my mam’s name is Barbara. I like to think that my dad married her because on some subconscious level he knew about St Barbara and felt that my mam would be good luck (he comes from a mining family). I’m sure this is a load of rubbish really, but its a nice story!

The second thing I loved was the book of photographs at the end of the exhibition, showing the corner of Charing Cross Road, Oxford Street and Tottenham Court Road before the Crossrail work began. I work near this area and so I’m really interested in it, but I don’t remember what it was like before the work began. These pictures display the old streets in all their glory, along with the famous music venue the Astoria which I don’t remember at all but which I can’t help regretting the loss of.

The exhibition, which is thoughtfully put together, is free to enter and runs until 3 September 2017 at the Museum of London Docklands.