For me, Christmas is a time to get lots of reading done: in bed, on the bus, or sitting on the sofa with my family. This year was no exception and I managed to read this lovely selection. From bottom left as seen in the above picture:

1. The Dark Is Rising – Susan Cooper
A children’s book that I never got around to reading as a child, I was inspired to read this by Twitter, where a Christmas read-along is happening using the hashtag #TheDarkIsReading. I haven’t actually checked out the hash tag much, but I’ve enjoyed the book, which begins on Midwinter’s Eve and comes to an end on Twelfth Night.

2. Bad Santas and Other Creepy Christmas Characters – Paul Hawkins
I’ve really got into Christmas history and folklore in recent years and this book is a fascinating look at some of the darker traditions and characters from years gone by, as well as thoroughly exploring the difference between Santa Claus and Father Christmas. My favourite creature is probably Krampus, but I also have a fondness for Iceland’s Christmas cat, who eats any children who do not get clothes for Christmas.

3. Murder on Christmas Eve: Classic Mysteries for the Festive Season – ed. Cecily Gayford
This selection of festive crime stories is great at creating an atmosphere, and I read it on Christmas Eve itself, which added to the magic.

4. The Dark Blue Winter Overcoat and Other Stories from the North – ed. Sjón
This was the only book I was a bit disappointed by. I love Nordic noir and I thought this collection of short stories might include crime tales, or else horror or folklore stories. However, with the exception of one story by Per Olov Enquist I found the collection to be slightly dull, with many of the stories too opaque for me.

5. Alice’s Adventures in Wonderland and Other Stories – Lewis Carroll
I got this as a Christmas present several years ago, but never got round to reading the whole thing. I’m familiar with the Alice stories and I love them, and The Hunting of the Snark is quite good fun. However, Sylvie and Bruno is very confusing and the two titular characters are supremely irritating – Sylvie is a typical Victorian angelic little girl, while Bruno speaks in an infuriatingly childish manner which I think is supposed to be cute but comes across as rather annoying. Much of Lewis Carroll’s work was written for his scholarly contemporaries, and has little interest for me, though there was a section on letter-writing full of good advice which I think I would do well to take.

6. Harry Potter: A History of Magic
I got this book for Christmas – a beautiful hardback published to coincide with the British Library Harry Potter exhibition.

7. Sleep No More: Six Murderous Tales – P.D. James
I haven’t read much P.D. James, but these short stories make me want to read more of her work. Along with the collection The Mistletoe Murder, which I read earlier in December, it shows that James was the master of the short story form, and the tales are clever, atmospheric, unexpected and sometimes very funny.

What did you read over Christmas? 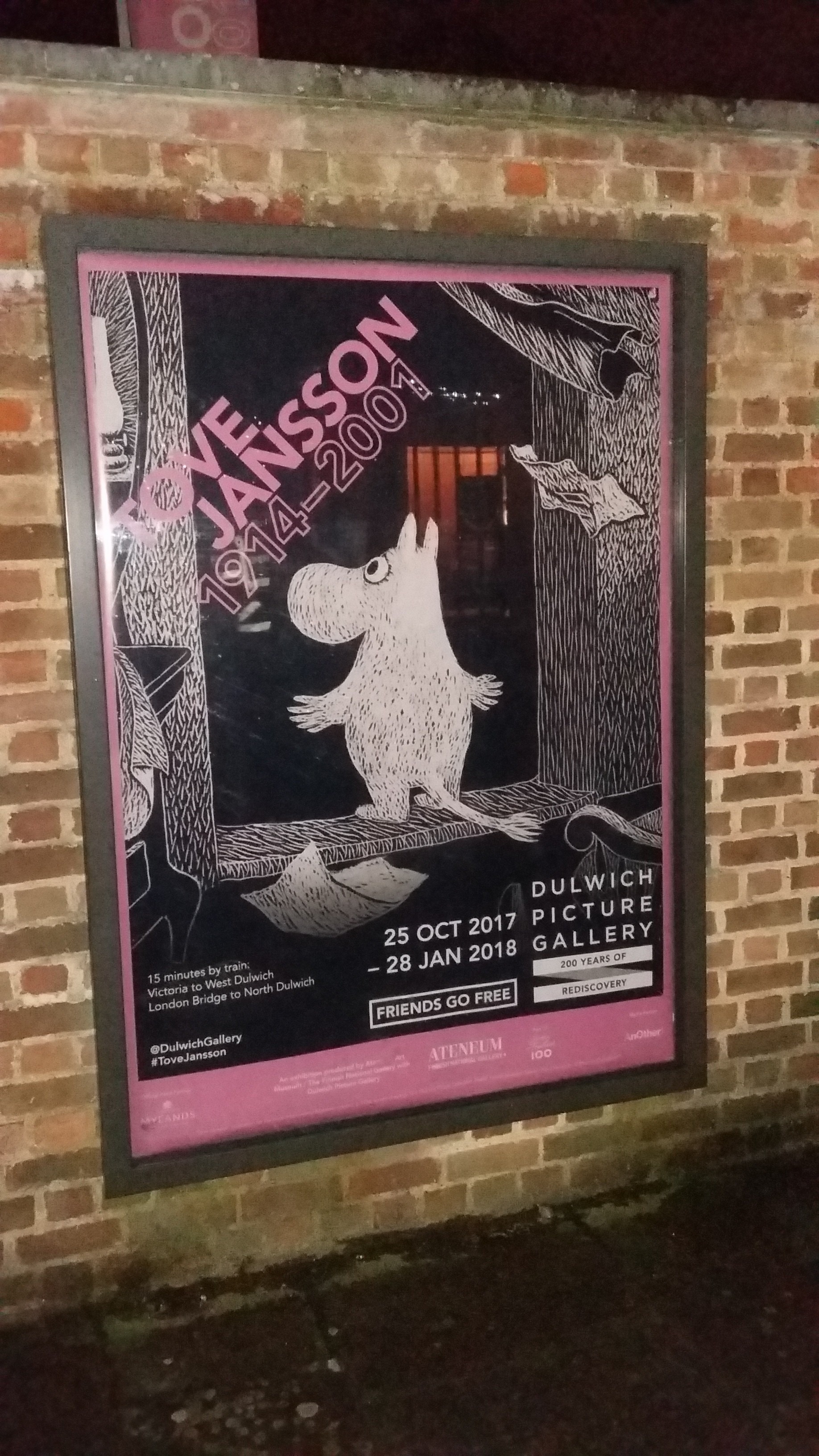 This year I read the Moomin books for the first time, and I also visited the Adventures in Moominland exhibition at the Southbank Centre. Continuing the theme, Dulwich Picture Gallery announced a Tove Jansson exhibition for 2017-2018, covering her artwork and illustrations from self-portraits to the Moomins and beyond.

Some friends and I booked to attend the special December event, A Moomin Winter’s Eve. This was an after-hours event that offered activities as well as a chance to look around the exhibition. When we arrived – after spending a while waiting for a bus at Brixton – we headed straight into the exhibition before it got too busy.

Tove Jansson (1914-2001) begins with the artist’s early work, striking self-portraits sitting alongside magazine illustration and magical landscapes. Her later work incorporates more traditional painting, before she turned to illustration in a bigger way. I had no idea Jansson was responsible for illustrating Swedish versions of The Lord of The Rings and Alice’s Adventures in Wonderland – her work is distinctively her own but also clearly captures the atmosphere of the stories.

Then comes her Moomin work, which forms around half of the exhibition. I love her wonderfully expressive drawings of these fantastical creatures, and it was fascinating to see them close up. As the daughter of two painters, Jansson saw herself primarily as a painter even while the world revered her for her work as a writer and illustrator, but while this exhibition helps to paint a wider picture of the artist, she is likely to remain best known for the Moomins. And why not? Her illustrations are certainly classifiable as art, and her books are children’s classics. 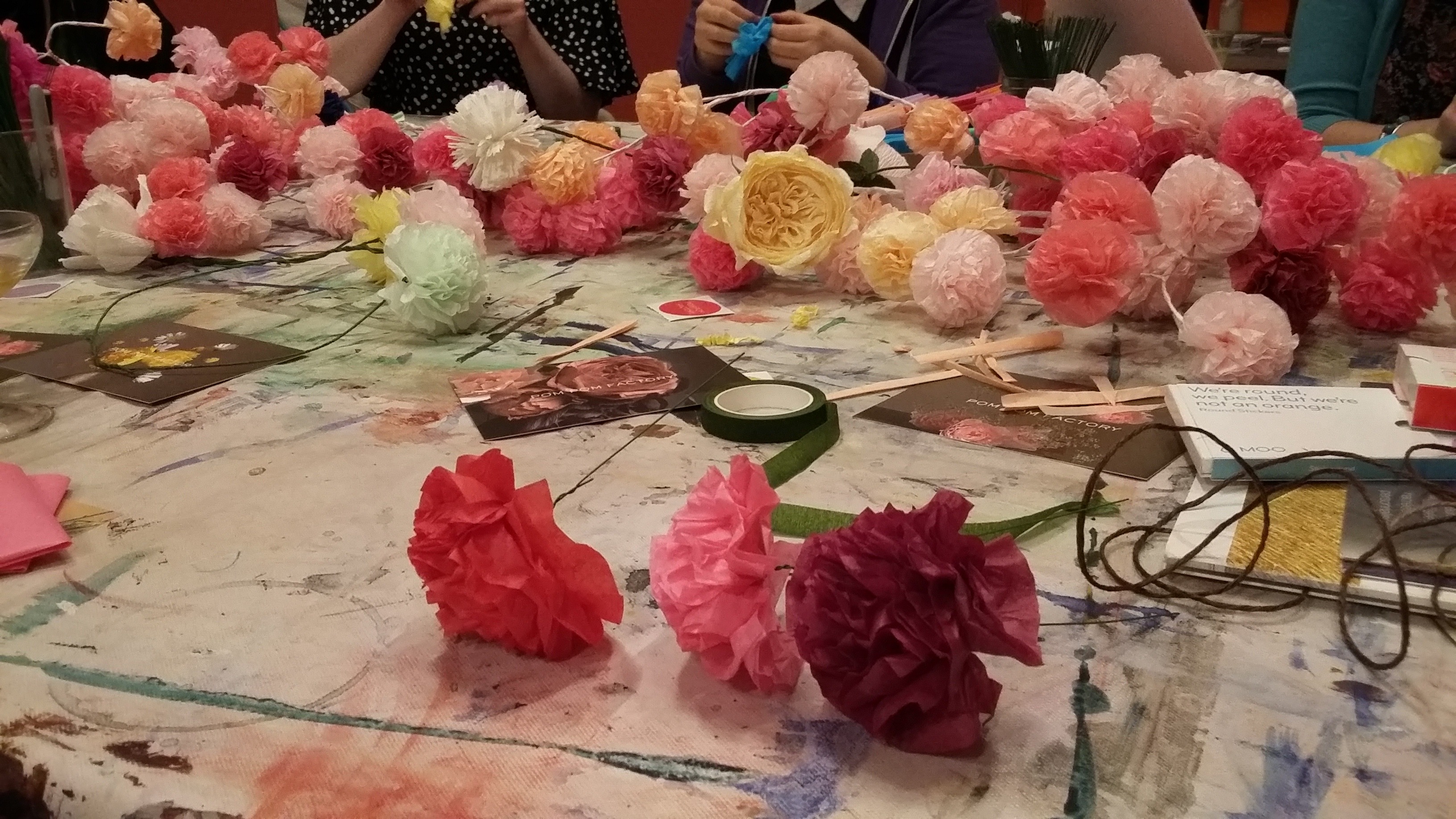 After the exhibition, we decided to check out some of the activities. First we went to make flower garlands in a Pom Pom Blossom workshop, run by Pom Pom Factory. We ended up wearing them for the rest of the evening. 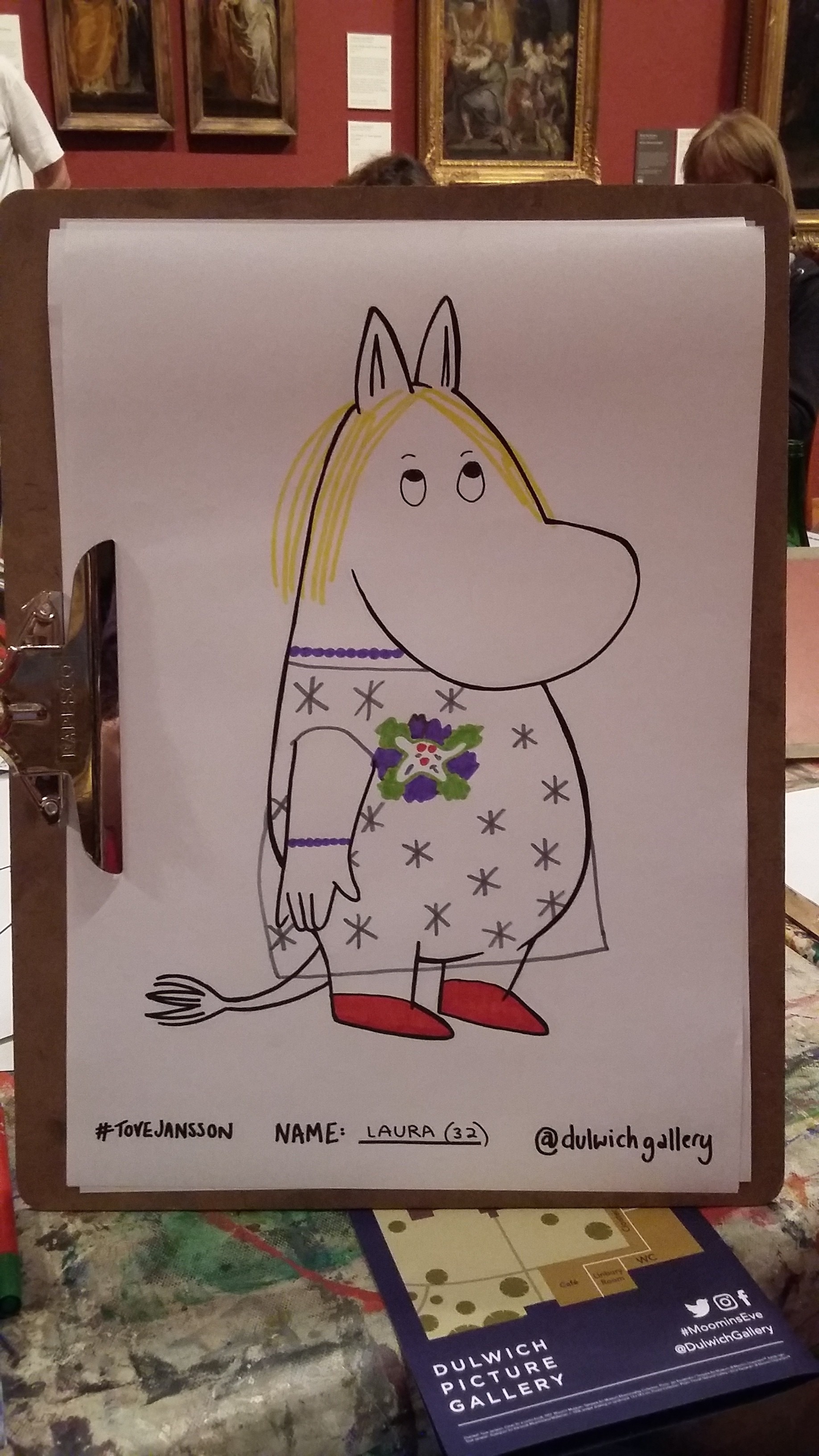 We then went to join the table drawing Moomin self-portraits. I am certainly no artist, but having a framework of a Moomin silhouette to work on, I managed to produce something passable. 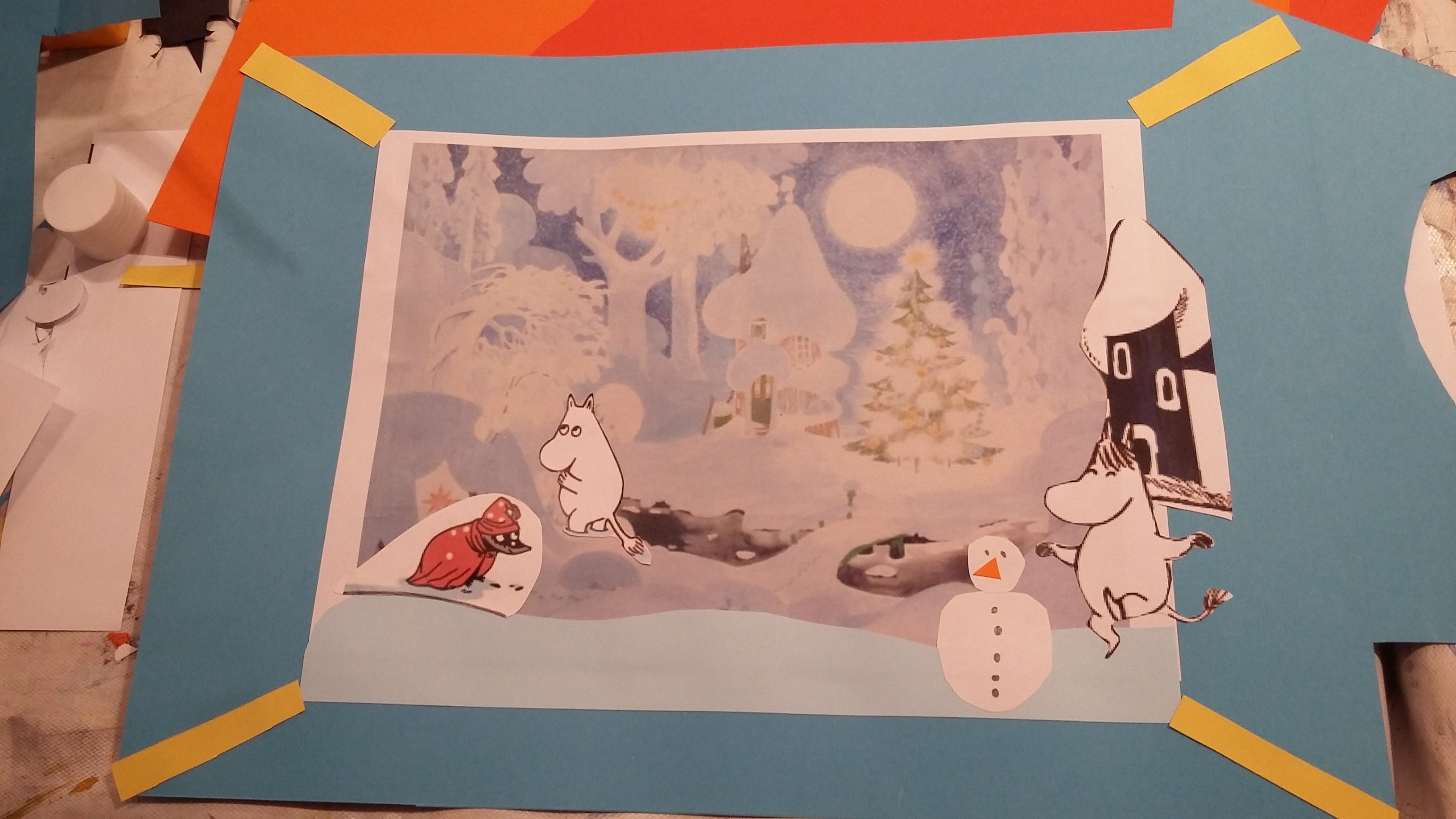 Finally we went down to the Moominvalley Photobooth, the idea here being to create a collage inspired by Moominvalley and have your photo taken, then superimposed onto your background. Sadly the camera battery ran out while we were making our collage, but it was still great fun.

The exhibition and the evening were lovely and a nice relaxing way to spend a Friday night. 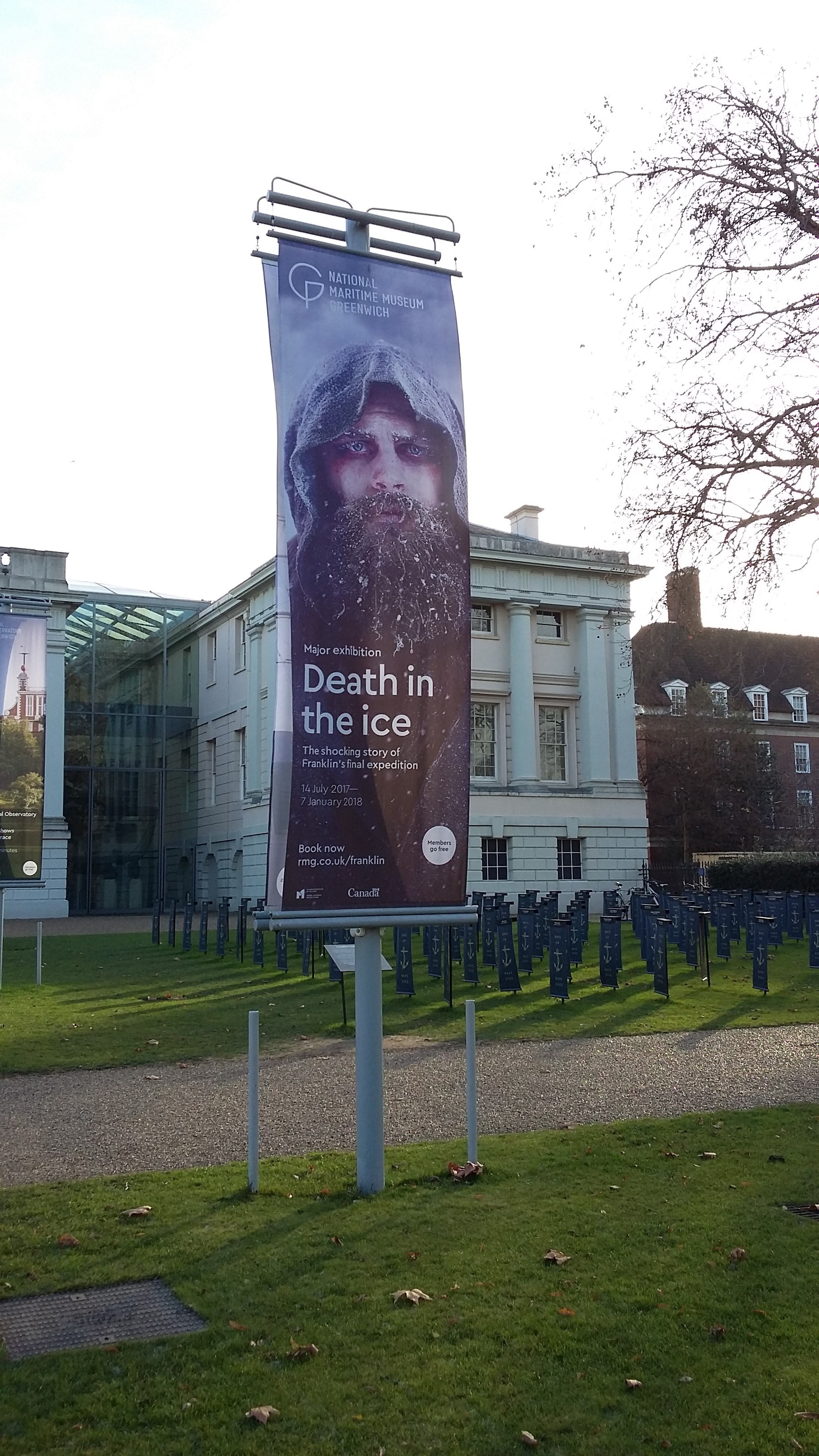 In 1845, a Royal Navy expedition commanded by Sir John Franklin to discover and chart the North West Passage set off on its journey. None of the 129 men on the expedition were ever seen alive again. Death in the Ice: The Shocking Story Of Franklin’s Final Expedition has been developed by the Canadian Museum of History (Gatineau, Canada), in partnership with Parks Canada Agency and with the National Maritime Museum, and in collaboration with the Government of Nunavut and the Inuit Heritage Trust.

The fate of Franklin’s expedition has been a mystery for over a century: despite numerous searches, many instigated by Franklin’s wife Jane, few traces were ever found. A handful of artefacts and some human remains have been discovered, but it is only in the last couple of years that the wrecks of the flagship, Erebus, and its companion vessel, Terror, have been discovered. The ultimate reason why the expedition ended in tragedy has never been established. Approaching the National Maritime Museum, you are confronted by a sea of flags; each one represents a man lost on the expedition.

The exhibition starts with an exploration of the Arctic environment and how Inuit peoples live and thrive in such harsh conditions. Centring the Inuit experience is important for two reasons – firstly because their way of life could have – but didn’t – inspire the various British expeditions that tried to survive in the Arctic in the nineteenth century, and secondly because Inuit testimony was frequently ignored when searchers were trying to find out what had happened to the crews of Erebus and Terror.

The exhibition continues with a look at life on board ship, the role of the different crew members, and brief biographies of key figures on the expedition. It explores the route the expedition took, past Beechey Island and round to King William Island, before the trail grew cold. The expedition spent several winters on the ice, in the dark and cold, with little food other than what they had brought with them from England.

Later the focus turns to the many search parties sent out by Lady Franklin and others, before the ships were finally given up for lost. I must say that to someone like me who knows this topic quite well, much of the exhibition up until now was already known to me, and I didn’t really learn anything new. The exciting part comes towards the end, when I got to view several artefacts, recently recovered from the wrecks, including the bell from Erebus, cast at the Whitechapel Foundry specially for the voyage. It’s still possible to read the date stamp on the side. Videos allow you to watch the divers at work underwater, exploring the wreckage of the ships.

No one really knows exactly why the crew all perished, but various theories are put forward: scurvy, lead poisoning, starvation, disease and more. Two crew members who died fairly early on in the journey have been exhumed, and the evidence in their case points to tuberculosis, but this probably did not infect the others on board. Evidence of cannibalism has been found, but it’s impossible to say for certain whether starving crew members killed and ate their fellows out of desperation, or only ate the flesh of those who had already died.

The exhibition is a fantastic introduction to the Franklin expedition for those who don’t know a great deal about it, and for those already fascinated by the topic it allows you to see some incredible artefacts. What will stick in my memory is the single shoe, preserved in the ice, from an unknown crew member – a poignant reminder of the expedition’s human cost. 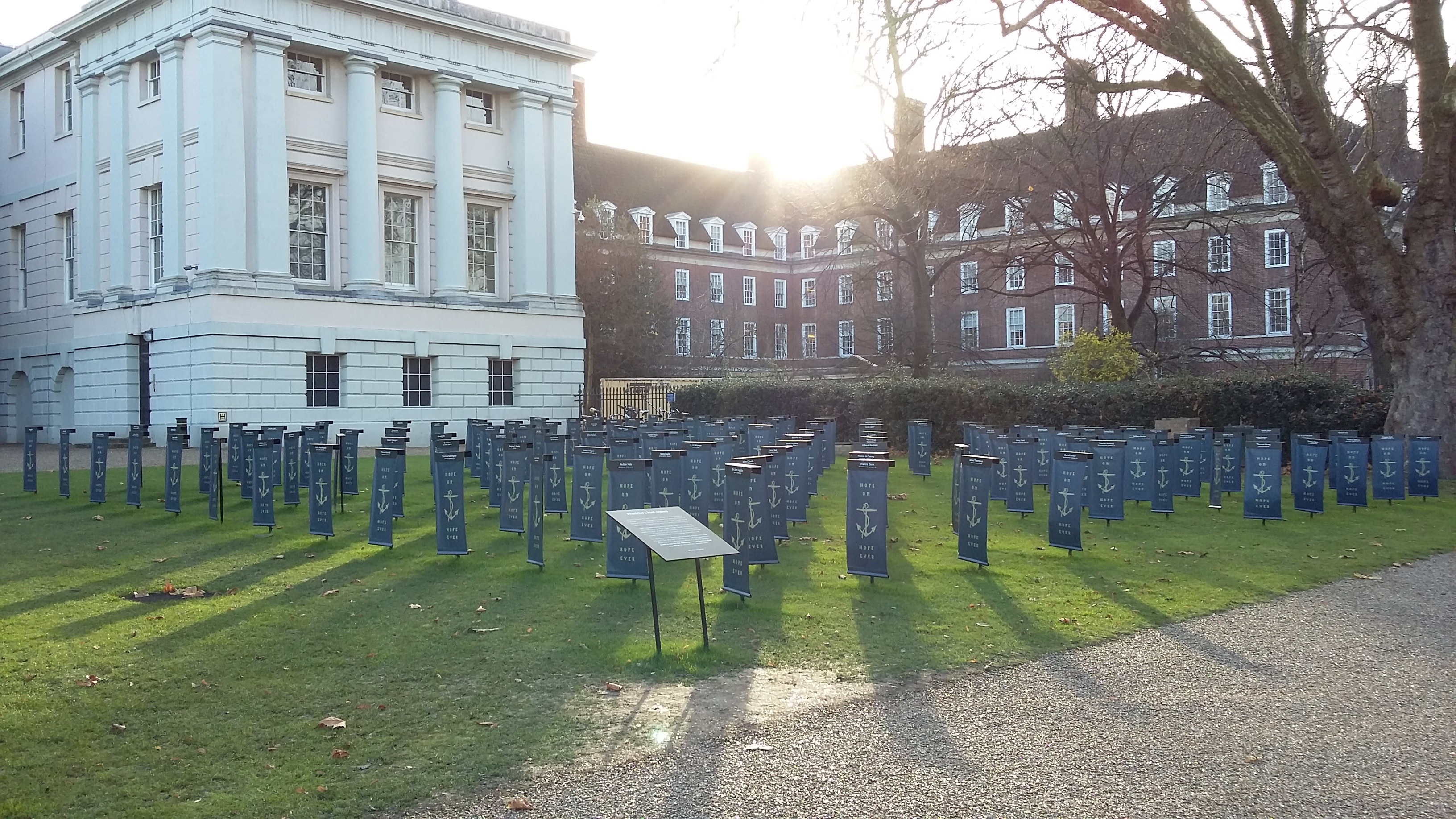 The Old Royal Naval College in Greenwich is currently restoring the famous Painted Hall. The Hall is not, however, closed to visitors during this time: it is possible to book tours of the ceiling, climbing up on the scaffolding to get close to the ceiling and get a close-up view.

We put on our high-visibility jackets and hard hats in the room at the end of the hall, where we heard a little about the history. The Painted Hall is one of the most spectacular and important baroque interiors in Europe. Its ceiling and wall decorations were conceived and executed by the British artist Sir James Thornhill between 1707 and 1726, the period when the United Kingdom was created and became a dominant power in Europe. The end wall mural, which has already been restored, shows King George I and his large family, alongside symbols of wealth and plenty. The artist himself is in the bottom right corner of the painting.

We headed up the stairs to where a makeshift floor has been built with scaffolding, giving the appearance of a low-ceilinged room. Our guide talked us through the various murals and highlighted some of the key figures on the ceiling, as well as discussing the restoration work.

Among the figures represented are Greek and Roman gods, monarchs, and even one of the Greenwich pensioners, John Worley, who served at sea for 70 years. He is depicted with a long white beard and painted to represent the season of Winter. Over the past few centuries there have been several restorations, and many workers have left their mark on the ceiling, mostly in the corners where they have daubed their initials. One cheeky person, however, added his name and date right in the middle of Queen Anne’s chest. I did take a picture, but it doesn’t show up very well.

The tour is fascinating and well worth the effort. Tours can be booked online for days throughout the week and are due to continue for the duration of the building work.