My second Ramin Karimloo gig in a year – truly, I have been spoiled. This gig rounded off 2019 nicely, in the intimate surroundings of The Other Palace.

Ramin sang lots of Broadgrass-style songs as well as songs from his latest album, From Now On, and other musical hits. No matter how many times I see him live, I am always left wanting more.

Throughout the show, Ramin kept hinting about an exciting forthcoming announcement. It turns out that he will be starring in a concert production of the musical The Secret Garden at the Palladium next spring. That is definitely going on my list!

After loving Marina’s spring 2019 concert, I bought a ticket to her November gig at the Hammersmith Apollo, part of Part 2 of her Love + Fear tour. It was good to be able to see her at a more traditional gig venue.

Some of the songs she performed were the same as last time, but there were a few new ones added, such as ‘I’m Not Hungry Anymore’, a track I’d never heard before, and my fave ‘Teen Idle’.

The Spice Girls aren’t the first group I’ve seen at Sunderland’s Stadium of Light, but they’re possibly my most anticipated. I’ve been a fan for years, their single ‘Wannabe’ was the first single I ever bought, and their album ‘Spice’ the first album. I never got a chance to see them live when I was younger, so I wasn’t going to miss this one.

They played all the hits and my friend and I had a fantastic time. I was sad that Victoria (Posh) wasn’t there, but frankly she was always my least favourite and the others definitely made up for her absence. I loved the costumes too, especially Geri’s – I really want an Anne-Boleyn-inspired initial necklace like hers!

Marina might have rebranded from her Marina and the Diamonds days, but she’s still the same person and still making good music. I went to see her live for the first time, at the Royal Albert Hall as part of her Love + Fear tour.
I was surprised at how good she sounded live – for some reason I’d thought she might be one of those singers who couldn’t sing live, which couldn’t be further from the truth! Most of the songs were from her most recent record Love + Fear, but there were plenty of tracks from her Marina and the Diamonds days, too. ‘Primadonna’ went down very well, as did ‘Hollywood’. My favourite, though, was ‘Happy’.

I’ve been a fan of Swedish singer Robyn for many years, and managed to get a ticket to see her perform live at Alexandra Palace. I went with a friend and we both had a great time. The atmosphere was amazing and Robyn was so good live. The best moment, naturally enough, was when she sang ‘Dancing On My Own’.

Another year, another Ramin Karimloo gig – something I’ve been looking forward to for months. After spending time on Broadway performing in the musical Anastasia, he has come back to the UK for a bit. His last Royal Festival Hall gig was back in 2012 – I don’t know where the time’s gone since then!

I can’t find a setlist, but Ramin sang songs from the musicals he is known for, like Phantom and Les Miserables – Music of the Night, Till I Hear You Sing, Bring Him Home – and tunes from other musicals like Oklahoma!, The Greatest Showman and Finding Neverland – Oh What A Beautiful Morning, From Now On and Neverland. He also included songs he has written himself and released previously, as well as a number of new songs. One of the reasons I love seeing Ramin live is that I am always being introduced to new types and genres of music.

It was such a good night and I only hope I don’t have to wait for another year to see Ramin live again.

I’ve written before about how much I love Ramin Karimloo, and I’ve been looking forward to his Union Chapel concert for months: he hasn’t performed in the UK for several years, owing to his role as Jean Valjean in Les Miserables on Broadway, followed by a stint in Japan. I was not the only one to be excited by the news, as the concert was sold out really quickly, so I was very happy to have got a ticket.

The Union Chapel is a beautiful venue, a working chapel which also hosts gigs, talks and other assorted events. It can be a bit chilly inside, but you’re allowed to take a cup of tea to your seat and watch the show, which helps create a cosy atmosphere. I must be getting old – this sounds very appealing compared to the traditional concert experience of moshing with a can of lager!

Ramin himself sounded incredible, but then I hadn’t expected anything less. He opened the show with “‘Til I Hear You Sing”, which is one of my favourite Andrew Lloyd Webber songs, and sang several musical numbers including “Oh What A Beautiful Morning” and “Bring Him Home”, which he performed as a duet with Hadley Fraser, who was present on stage for the entire concert. What I love about Ramin, though, is that he is so versatile – over the last few years he has branched out from musical theatre, and his gig included original songs and covers ranging from country and bluegrass to rock.

The concert was such a brilliant experience, and I’m really glad I made the effort to go. Who knows when Ramin will be back in the UK again? I’ve added the setlist at the bottom of this post: I would encourage you to go and look up the list on YouTube, to discover why this man is so amazing.

3. On The Road to Find Out/Wild World

6. Letting The Last One Go

9. Bring Him Home (with Hadley Fraser)

10. We’re All In This Together

16. Will The Circle Be Unbroken

Another year, another Big Reunion concert, this time the Boy Band Tour. I went to see this at Newcastle Arena with some friends and we had a great time, although sadly the venue was not full.

It was great to see 911, Blue and 5ive again (although 5ive are sadly now down to “3hree”) – 911 in particular were great, and I can’t believe Jimmy and Spike can still handle those dance moves. I was particularly excited about seeing A1, who were not in the last tour. ‘Same Old Brand New You’ is a BRILLIANT pop song and my friend and I have been humming it for a year solid, so it was great to finally see it live.

I wasn’t too bothered about Damage or 3T – the guys seemed lovely and they can certainly sing, but I didn’t recognise any of their songs (except for Damage’s final track) and they were all dull ballads in any case. 5th Story, on the other hand, were a treat – a “supergroup” made up of solo singers and band members, all of who were one- or two-hit wonders and who were brought together for the second series of BR. Kenzie from Blazin’ Squad, Dane Bowers from Another Level, Gareth Gates of Pop Idol fame, singer Kavana, and teen heartthrob Adam Rickitt made up the quintet – the group’s rendition of former Corrie star Adam Rickitt’s hit ‘I Breathe Again’ was a particular highlight. The gig ended with all of the bands coming on stage to sing Gates’ hit, a cover of ‘Spirit in the Sky’, which I always thought was an odd choice (British pop star singing about Jesus?!) but it proved a cheering finish.

The other night I went to see singer Katy B at the Roundhouse in north London. I booked my ticket ages ago and I nearly didn’t make it – I’d arranged to meet a friend I hadn’t seen for ages on the same night and had decided to miss the gig, but as it happened our evening ended earlier than I’d anticipated, and I had time to get to Chalk Farm before Katy was on stage at 9.

Now although I do like Katy’s music (or else there wouldn’t have been much point in me booking this show at all), I wasn’t really expecting great things. The ticket was cheap (under £20 for a gig – I’m not used to these prices!) and I thought it might be a nice night out. However, I really enjoyed myself. Katy has a great voice and gave an impressively good performance, singing loads of her hits and really playing to the crowd.

I was also pleasantly surprised by how good the view from my seat was. I got the last ticket remaining, and the seat was in the circle, right at the end. However I could see everything really well and the atmosphere was still great. I also found myself admiring the architecture in the building – the Roundhouse is a former railway shed and many of the original features are still present and visible.

I went to see Paloma Faith at the Roundhouse in Chalk Farm on Tuesday. The last time I saw her was at Glastonbury 2010 when I am sure she was high – she kept giggling madly and acting all spaced-out. Maybe that’s just her though? Anyway, she definitely seemed more with-it on Tuesday, performing tracks from all three of her albums, particularly her most recent record, ‘A Perfect Contradiction’. 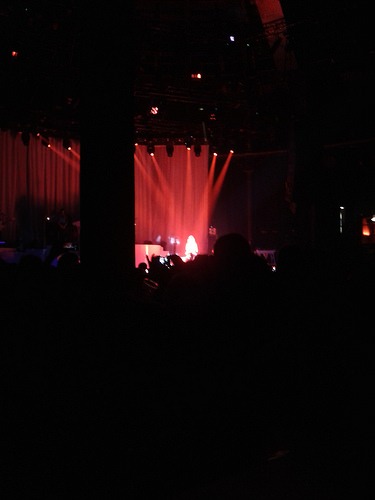 I loved her first album and really like her most recent one, which is more grown-up and soulful. I think my favourite track is ‘Can’t Rely On You’ which is really catchy (that’s the extent of my ability to analyse music I’m afraid). I was pleasantly surprised by the songs she performed from her second album: I was really disappointed with that one but I thought the songs sounded better live, and encouraged me to go back to the album and listen again. 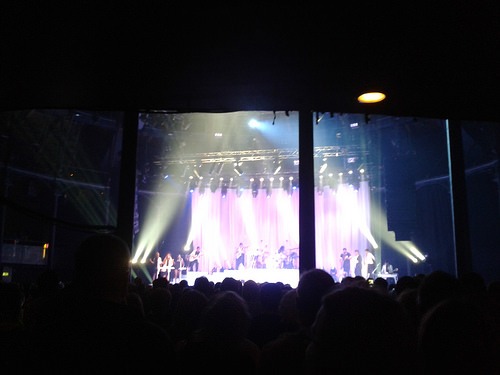 The venue itself was great: I’ve been to the Roundhouse to see Shakespeare but this was the first time I’d attended a gig there. The space worked really well and was a perfect size. A good night indeed!