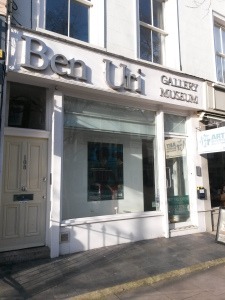 After visiting a very interesting exhibition at Somerset House last year, Out of Chaos – Ben Uri: 100 Years in London, I decided to visit the actual Ben Uri Gallery which is located in north London.

The Ben Uri Gallery is an art museum focusing on the work of artists of Jewish descent. It also focuses on the universal themes within these artists’ work, such as identity and migration. The Gallery displays its materials in a programme of temporary exhibitions; the exhibition I saw, which has just ended, was entitled Rothenstein’s Relevance: Sir William Rothenstein and His Circle. It contained impressive works, many of which looked at the concept of Jewish religious worship; others were more traditional portraits or drawing room scenes.

I was surprised at how small the Gallery actually is: it consists of one small ground floor room and another, larger, basement space. Still, with free entry it is certainly worth popping in.

The exhibition Out of Chaos – Ben Uri: 100 Years in London is currently running at the Inigo Rooms in Somerset House‘s East Wing (part of King’s College London). Marking the 100th anniversary of the foundation of the Ben Uri Gallery, it brings together many of the treasures of the collection.

The exhibition explores the history of the Gallery, which began as a London-based art society founded in Whitechapel in 1915. After a rocky start and a turbulent history, covering two World Wars and multiple venue changes, it is still going strong.

The rooms cover the historical timeline, the Ben Uri archives and the theme of immigration, with different rooms devoted to identity, conflict and the postwar world. Early works include those by Simeon Solomon, Solomon Hart and Lily Delissa Joseph, while the later “Whitechapel Boys” include figures such as David Bomberg and Isaac Rosenberg. One room “Forced Journeys”, looks at the impact of the Holocaust, while other displays examine art after World War II.

The final section of the exhibition is focused on the present, displaying works by artists working now and laying out the plans for the Ben Uri Gallery to be a space for all migrants, not just Jews.

I really enjoyed the exhibition, which was fascinating and contained lots of different styles of artwork. The idea of transforming the Gallery into a space for migrants of all kinds is a brilliant one, too, and I wish them the best of luck with their endeavour. Hopefully I can get to the Ben Uri Gallery itself before this happens.

The free exhibition runs until 13 December and is open 12pm-6pm Monday to Sunday, and until 8.30pm on Thursday.