On Sunday I went to see Skyfall at the BFI IMAX, near Waterloo station. I couldn’t believe how expensive it was. There’s a reason I don’t go to the cinema very much anymore. Still, it was JAMES BOND. 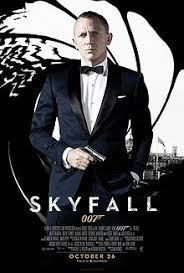 One of the friends who came to see the film with me commented that one of her friends had seen it, and that that their verdict was that it was good, but Daniel Craig kept taking his top off. I have no idea why this is considered a bad thing.

I did think the film was excellent, a fitting marker of the fiftieth anniversary of the 007 franchise. I’ve been a fan since my childhood; I love the old sixties films with Sean Connery, but the films need to adapt and change in order to stay fresh and relevant, and I thought Sam Mendes did a brilliant job at bringing the series up to date while still remaining true to the spirit of the originals. Continuing the rejuvenation of the series, which began with the superb Casino Royale and continued with the less impressive Quantum of Solace, we find out more about Bond’s troubled background, are reacquainted with Judi Dench’s M – determined to prove that MI6 is as relevant as ever in the modern age – and are introduced to Q, no longer the white haired and white coated eccentric of the old days, but an incredibly youthful computer geek, played by Ben Whishaw. “Were you expecting an exploding pen?” he says to Bond when they meet for the first time in the National Gallery. “We don’t really go in for that any more”. We also meet another character familiar to fans of the series – I won’t say any more for fear of spoilers.

Javier Bardem’s villain is chilling and camp, and in a modern twist is a whiz at technology, sabotaging computer systems from the safety of his private island. The locations in this film are stunning, from Turkey to Shanghai and Macau, though my favourite parts were those set in London: as a bit of a London Underground geek, I was excited to see Bond weaving his way through the subterranean tunnels of London and amused to watch him try to navigate the tube at rush hour: though as my friend pointed out, it was wrong that he was travelling on a Jubilee Line train on a District Line track. I doubt that many people would notice this, though!

The ending of the film made me sad as I hadn’t seen it coming. I was pleased once I realised what the title of the film was referring to, as this had me puzzled for a while.

I loved Skyfall and can’t wait for the next instalment of Bond in a few years’ time. I understand that Daniel Craig will be returning, which makes me extremely happy.