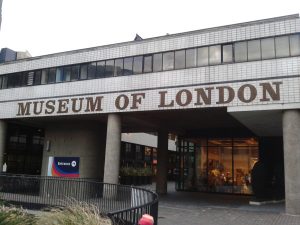 On Sunday I visited an exhibition at the Museum of London, entitled Doctors, Dissection and Resurrection Men. It explores the relationship between the trade in dead bodies and the study of anatomy in the early 19th century, and was inspired by the 2006 excavation of a burial ground at the Royal London Hospital, in which evidence of dissection, amputation and anatomical examination was found. I am rather squeamish and was worried that the exhibition would be a bit gruesome for me, but despite a few icky bits I was fine. The exhibition was sensitively arranged and the bones and anatomical models on display were generally presented from a scientific point of view.

Surgery during this period was difficult and dangerous, made even more risky by the lack of anaesthetic. Surgeons needed to develop their knowledge of anatomy and disease, and the best way to do this was by examining and dissecting real bodies. However, demand far outstripped supply. Religious beliefs, superstitions and personal feelings meant that the vast majority of people were terrified at the prospect of their bodies being cut up after death. In addition, they did not want to be equated with murderers, whose corpses were habitually donated after being hanged.

The ‘resurrection men’, or ‘body snatchers’, stepped in, raiding churchyards to provide the surgeons with the corpses they required. They were feared by the population at large: the exhibition displayed an iron coffin used to protect its inhabitant from being removed, and other artefacts designed to prevent grave robbery. This fear is understandable, especially given the publicity surrounding those body snatchers who did not stop short at robbing graves, but actually resorted to murder. Still, the bodies were necessary to the surgeons in order to broaden their knowledge of anatomy, and thus enable them to save lives.

I was interested and surprised to learn, at the end of the exhibition, that there is still a shortage of bodies for dissection at the beginning of the 21st century. Maybe there needs to be some sort of campaign?