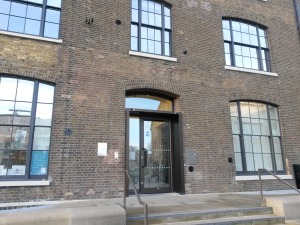 The House of Illustration is a relatively new gallery in the recently redeveloped Granary Square in King’s Cross. It is home to changing exhibitions covering the history of illustration in all its forms: recent exhibitions have included images from Ladybird books and the work of Quentin Blake.

I visited in order to see the Main Gallery exhibition, E. H. Shepard: An Illustrator’s War. Shepard is perhaps best known for his classic illustrations of A. A. Milne’s Winnie-the-Pooh stories, probably as well-known as the books themselves. I had no idea until very recently that he also produced a great deal of work while serving in the trenches of the First World War.

Shepard’s distinctive style is evident in these wartime artworks, but the subject matter is very different. His pictures include humorous images of soldiers trying to make the best of life in the trenches, stark pictures of bare landscapes, and even topographical works used for strategic purposes. Many of his cartoons were sent to Punch and other publications. Shepard also spent time in Italy towards the end of the war, producing fascinating drawings of the scenes he witnessed, and meeting none other than the author Ernest Hemingway. Some of his work was more personal: he drew pictures in his diaries and in letters to his wife, which are on display for the first time. It was fascinating to see this different side to the familiar illustrator.

While in the building I also visited the exhibition in the South Gallery, Lauren Child’s Dolls’ House. Childs is an author and illustrator most famous for the Charlie and Lola books – I’ve heard of these books even though I don’t have anything to do with small children, which suggests that they are pretty successful. Childs has been working on her own dolls’ house for over 30 years, and it is beautiful – extremely detailed. Alongside the house, sets from the author’s works are displayed: the book The Princess and the Pea was made with photographs of three-dimensional miniature sets.

The House of Illustration is well worth a visit, possibly more than one, as the constantly changing exhibitions ensure that you are likely to go back again and again. 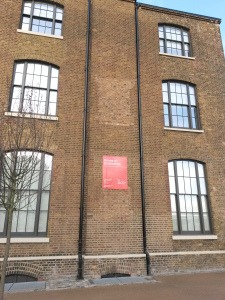