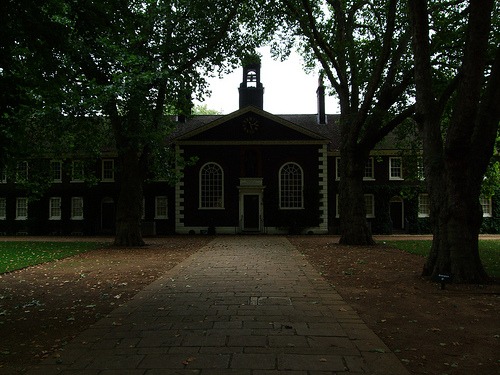 After intending to do so for several months, I finally got round to making a visit to the Geffrye Museum in east London. The museum focuses on the history of the home during the past four centuries, exploring how homes have changed and how these changes reflect and are reflected in the way people live.

Open 10-5 every day except Monday (it’s open Bank Holidays though), the museum is free to visit and easy to reach:  it’s fifteen minutes away from Old Street tube station, and a couple of minutes from Hoxton Overground station. The building itself is a set of almshouses built in 1714 by the Ironmongers’ Company, owing to a bequest from twice Company master and former Lord Mayor of London, Sir Robert Geffrye. Now Grade 1 listed, the building has been a museum since 1914, after it was sold off by the Ironmongers’ Company who wanted to relocate the almshouses out of Hoxton, which had become one of the most run-down and unhealthy parts of London.

One of the almshouses, No. 14, has been restored and is open to the public (for a small fee) on selected Saturdays and weekdays. Sadly it was not open on the day I visited, so I will have to make a return trip in order to see it. The museum’s past is also evident in the almshouse chapel, which you come across around halfway through your visit.

On entering the museum, you witness a microcosm of its theme: a selection of chairs arranged in a semicircle, each from a different era. Looking at them, you can see how styles have changed in four hundred years.

Most of the museum is made up of period rooms, each of which is made up to look like a typical family room from a particular period. The rooms are arranged in chronological order, and provide fascinating insight into how people lived during those times.

I really enjoyed looking at the development of the rooms and how they changed over time. One important factor in this change was that in the beginning, many middle-class people worked from home, perhaps running their business from the lower floor or front room of their house and living in other rooms. Later, people began to go out to work, and homes were used only for leisure purposes.

Later on, there is a section of the museum devoted to the twentieth century. Another arrangement of chairs greeted me at the start.

These rooms represented shorter spaces of time than the older ones: each portrayed only a decade or so. Perhaps this reflects the more rapid changes in design during the twentieth century.

The last bit of the museum was a small exhibition about the people who live and work in Hoxton, a nice complement to the rest of the exhibitions.

I liked the Geffrye: it is a lovely place and there’s a lot to see considering that it’s free. Definitely worth a visit.

I had a very busy and tiring Saturday. I visited 11 tube stations. Eleven! And they were all in east London, most of them on the Central Line.

My travels took me through Leyton and Leytonstone up to Woodford and Snaresbrook. The most notable part of my journey was seeing the Hitchcock mosaics at Leytonstone tube station. Director Alfred Hitchcock grew up in the area and a few years ago several mosaics picturing scenes from his films were installed in the corridor leading to the ticket hall. I had fun trying to guess which film each mosaic represented.