Yesterday I attended a talk organised by the Conway Hall Ethical Society and the London Fortean Society, held at Conway Hall. The talk, entitled Science in Wonderland – The Scientific Fairy Tales of Victorian Britain, was delivered by Melanie Keene, a historian of science for children.

Keene spoke about how and why fairy tales were seen as appropriate mediums to instruct children in science. Fairy stories were very popular in Victorian Britain, and science was also growing in popularity. In 1859 The Fairy Tales of Science was released, a compilation of non-fiction lectures. We were shown some impressive pictures, including witches flying through the skies on telescopes and an evocative image of “monster soup”, a display of life as seen through a microscope. One unusual love story saw a microscopist falling in love with a creature living in his petri dish, who sadly subsequently died. Fairies were drawn as chemical elements, holding hands to combine into molecules, while L. Frank Baum’s The Master Key was subtitled An Electrical Fairy Tale. Finally, referencing the title of the lecture, an edition of Alice’s Adventures in Wonderland was displayed, showing Alice’s encounters with creatures beneath the microscope, even more unusual than the ones she encounters in the Lewis Carroll original.

A couple of months ago I was due to attend a talk on fairy tales involving Philip Pullman and Neil Gaiman. Sadly Philip Pullman couldn’t attend due to illness, so I was happy to discover that the National Theatre was hosting a talk by him on the same subject, to take place on the 2nd of January. I couldn’t think of a better way to start the New Year, so I bought a ticket straight away.

Pullman has recently released Grimm Tales for Young and Old, a selection of the fairy tales originally collected by the Grimms in the nineteenth century. I have the book and I enjoyed reading it: I think Pullman succeeded in his aim to make the tales “as clear as water”, to write them as simply and as straightforwardly as possible. Some of the tales, such as ‘Snow White’ and ‘Rapunzel’, are well-known while others, such as ‘The Three Snake-Leaves’, are not. Even the well-known tales, however, are often different to the current popular versions. For instance, in ‘The Frog Prince’, the princess doesn’t kiss the frog to turn him into a prince; she throws him against a wall! Out of around two hundred tales, fifty were selected for the book (I have the special Waterstone’s edition, which includes an extra three stories).

I enjoyed the talk (facilitated by journalist Nicolette Jones). It was interesting to hear Pullman’s views on the tales, such as the simplicity of the stories, the straightforward sense of justice in them, and the ‘cardboard’ characters who are timeless in their universality. He remarked on the importance of telling stories – not from a book, but from your own mind – for anyone with responsibility for children. At this point I became glad that I do not have any such responsibility. I am sure Pullman is right, but the thought of sitting in front of a bunch of expectant children and making up a story as I go along frankly terrifies me!

I also enjoyed hearing Pullman’s answers to the questions and remarks of the audience. In response to his (understandable) statement that he didn’t like one of the stories – where a father cuts off his daughter’s hands – and is not punished – an audience member said that she found the courage and resilience of the daughter inspiring: a different way of looking at things. Another wondered if teaching children the kind of black and white morality and justice found in the tales was appropriate, given the complexity of real life. Pullman said yes and I’m inclined to agree with him: I think you need to start somewhere, and you can begin with simplicity and go on to more complex ways of thinking later. After all, they teach you when you are small that minus numbers don’t exist, to avoid confusing you, and introduce them later when you are bigger and (hopefully) cleverer.

It turns out that Pullman is a big fan of Neighbours – after writing in the morning he takes a break for lunch and sits down to watch the lunchtime edition. He clearly has good taste in soaps! 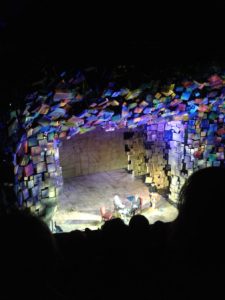 I managed to get hold of a ticket for Grimm Tales: Telling Stories last night at the Cambridge Theatre in London. I was gutted when I found out that Philip Pullman wasn’t going to be there owing to ill health (get well soon, Philip!) but was partly mollified on learning that Meg Rosoff would be conversing with Neil Gaiman instead. Another surprise came when author Audrey Niffenegger (The Time-Traveller’s Wife and Her Fearful Symmetry) appeared on stage to read a story from Pullman’s new book, a retelling of several Grimm fairy stories. She received a massive cheer from the audience, which she became part of after her reading was complete.

Despite being disappointed at Philip Pullman’s absence, I enjoyed listening to Neil Gaiman (author of several books including Neverwhere, American Gods and Coraline) and Meg Rosoff (author of a number of teen novels including How I Live Now) talk about the history of fairy tales and their relationship to culture. Some of the things they discussed I already knew – such as the original version of the Sleeping Beauty story (put it this way, she wasn’t woken with a kiss) – but other ideas and concepts were new to me.

I found it interesting to hear about stories from contrasting perspectives and different cultures: Neil Gaiman is a British author living in the USA and Meg Rosoff is an American author residing in London, and I enjoyed hearing about their diverse experiences. The differences between the US and British attitudes to scary stuff were fascinating: the film of Gaiman’s Coraline – a frightening movie for kids – was greeted quite matter-of-factly by British audiences and critics but with puzzlement by their US counterparts, who were surprised that it was meant to scare kids.

The evening, which was over far too quickly, ended with a reading by Gaiman of his new story, Click-Clack the Rattlebag. I am sure I was not the only audience member to be enthralled by the tale: the twist towards the end drew a gasp from the audience and I spent a lot of time looking over my shoulder on the way home!