Manet: Portraying Life at the Royal Academy of Arts was the last exhibition I saw on Sunday. I had originally planned to visit on Friday night a couple of weeks ago, but like so many exhibitions recently, it was sold out so I decided to book in advance for a later date. 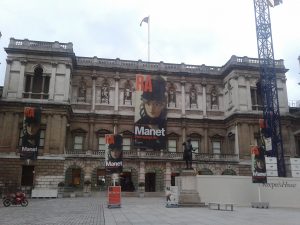 This is the first major exhibition in the UK dedicated to the work of Eduoard Manet (1832-1883). It focuses on his career as a portrait painter. Although I was aware of Manet before the exhibition, I always imagined him as a landscape painter, so this aspect was interesting to me.

Manet came from a wealthy family and didn’t have to live by his art, but he still sought approval from the Paris Salon, which was, however, often rejected. He used elements of the Old Masters and the new Impressionists, creating an art that was different from both with an unique style. Though photographic portraits were growing in popularity during the time in which he worked, Manet still believed that painting offered opportunities that photographs didn’t in evoking the personality of the individuals painted.

Manet painted several portraits, including pictures of his friends and family: his wife, Suzanne Leenhoff, and stepson, Léon, appear frequently, as do a number of studies of friends including Antonin Proust (no relation to Marcel). Some of his pictures are status portraits of political or other celebrity figures; several of these are unfinished as their sitters could not offer the time that Manet required to model for them. Some of my favourite pictures are those of the writers and artists who were Manet’s friends, including Stéphane Mallarmé and Emile Zola.

My favourite Manet pictures, however, were those which included models rather than important or celebrity figures, particularly those of Victorine Meurent, who appears in the fascinating painting The Railway (1873), in which a red-haired woman gazes at the viewer while the child beside her stands facing the other way, watching the approaching steam train whose presence is indicated by a cloud of smoke. Manet’s style is modern but influenced by older painters, striking and memorable.

Manet: Portraying Life is on until the 14th of April.

Harrow School is one of the most famous schools in the UK, and possibly the world. Its alumni include several writers, artists, politicians and even actors – the lovely Benedict Cumberbatch is an Old Harrovian.

The school has an art gallery and museum – the Old Speech Room Gallery – which is open to the public, though only on certain days of the week during term time. I took the opportunity to visit when I had a day off work.

The Old Speech Room was built in 1819-21 as a chamber in which to encourage public speaking. It was converted into a gallery by Alan Irvine in 1976 as a repository for the School’s distinguished collection of antiquities and fine art.

The main reason I wanted to visit at this particular time was the Cecil Beaton exhibition. Beaton was a photographer and artists who was popular in the mid-20th century. He photographed film stars such as Audrey Hepburn and Marilyn Monroe and also gained prominence as a war photographer. In my old job at Cambridge I was responsible for cataloguing his letters, so I was interested to see this exhibition of his portrait photographs. I really like his work – I’m no photographer but I can tell that his use of light and composition is brilliant.

The gallery has an interesting collection of Egyptian and Greek antiquities, and also contains artworks, including a painting by the former Prime Minister Winston Churchill. What I was most excited about, however, was the exhibition of artefacts relating to Lord Byron, including his swords and other possessions. Some of his letters were on display, and I spent a while trying to decipher his handwriting, which is surprisingly readable considering the time at which it was written. I’ve read Byron’s collected letters – they are fabulously lively and engaging, and his personality leaps off the page with every sentence. Seeing the pieces of paper on which he actually wrote was amazing.

The gallery is a bit out of the way, and the opening times aren’t always ideal, but it’s well worth visiting if you can – there’s a surprising amount to see, and it’s very interesting, not to mention free.

Opening Hours: Weekdays during term time between 2.30pm and 5.00pm.

I had a bit of time left on Saturday morning and decided to pay a visit to the Saatchi Gallery, which is fairly close to Buckingham Palace. I’m not the greatest fan of modern art, and I must confess that one of the main reasons I went was so that I would have an excuse to tick Sloane Square station off my list.

Founded in 1985 by advertising behemoth Charles Saatchi in order to display his collection of contemporary art, the Gallery occupied several premises before finally settling in the Duke of York HQ building on King’s Road, Chelsea with an exhibition dedicated to new art from China. It has been there since 2008, and Saatchi gifted the Gallery and more than 200 works to the state in 2010. The Gallery aims “to provide an innovative forum for contemporary art”.

The Saatchi Gallery is pretty famous for holding regularly changing exhibitions of modern art, and the current exhibition is called Korean Eye 2012. Having been to Korea before, I was interested in seeing what Korean art was all about and this curiosity partially overcame my aversion to modern art, which I don’t understand and rarely like.

Many pieces displayed as part of the exhibition were odd to say the least. The first exhibits I came across were the apparent result of smashing up a pile of crockery and sticking it back together to produce something resembling a termite nest. A giant ball of wood dominated one room. I came across some pictures which appeared fairly normal until I walked past them and realised they were hologram pictures: the stylishly clad ladies viewing works of art miraculously appeared to shed their clothes when viewed from a different angle. This technique is undoubtedly clever, but also a bit voyeuristic.

Still, the display exceeded my expectations and I was genuinely impressed by some of the work. In one room I came across a round side table on which rested a cup of tea. Initially scornful, I peered at it more closely and observed a little whirlpool disturbing the surface of the tea. The exhibit was accurately titled ‘Storm in a Teacup’ and I really liked it, partly because I genuinely don’t know how the whirlpool got in there.

Another artist had produced models from cardboard, which were well designed and carefully put together, except for the fact that they were unfinished. A cardboard dog with perfectly constructed and finished hind legs and an abstract box-shaped head was particularly eerie. In another room, photographs of women posing in white dresses took on a life of their own with the addition of white fabric attached to the bottom of the frames, extending the dresses beyond the boundaries of the photographs and adding an extra dimension to the work.

In addition to the Korean art on show, there was an exhibition of chess sets, each the work of a different artist. There were some pretty unusual sets on display: I especially liked the ‘picnic’ set with slices of pizza as pawns. There was also a great set with one team made up of characters like Superman, WonderWoman and Jesus and the other consisting of such figures as Voldemort, Dracula and Saruman.

The Saatchi Gallery itself is well laid out with a clean white design and logically labelled exhibition rooms. It is free to enter and doesn’t have the pretentious atmosphere I had expected: there were all kinds of people there, including Korean (I presumed) holidaymakers and families with small children. I never thought I’d say this about a modern art gallery, but I actually quite enjoyed my visit, and I’d consider going back. 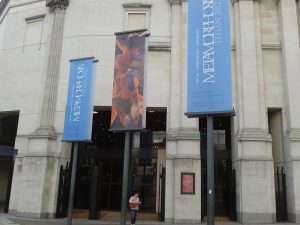 A sunny autumn afternoon; the perfect time to take advantage of the National Gallery’s late night Friday opening and check out the small exhibition Metamorphosis: Titian 2012 in the Sainsbury Wing. Basically, three Titian paintings –  Diana and Actaeon, The Death of Actaeon and the recently acquired Diana and Callisto – have been displayed alongside modern ‘responses’ to them.  Chris Ofili, Conrad Shawcross and Mark Wallinger have created pieces of art inspired by the paintings, with varied results. I wasn’t sure what to make of the metal crane, and the costumes were rather odd, but I liked the sets (works inspired by the paintings were performed at the Royal Ballet). I’m not the biggest fan of modern art, but I enjoyed the original Titian paintings.

Dulwich Picture Gallery was my destination of choice on Saturday. To get there, I took the train from Victoria station. It had been raining that morning, but by the time I got there, the sun was out and it was actually quite warm.

There were some rather odd sculptures in the garden: faces made up of flowers and foliage. I think they were meant to represent the four seasons, but it took me some time to work out which was which.

Dulwich Picture Gallery was the first purpose-built art gallery in England and was designed by the architect Sir John Soane (who was also responsible for the Bank of England, and is now most famous for his museum in central London), created with top-lighting to illuminate the pictures to best effect without causing too much light damage. The collection was built up by Noël Desenfans and Sir Francis Bourgeois, originally for the King of Poland, though after his forced abdication the pair were left with the collection on their hands. After trying unsuccessfully to offer the works to numerous figures of royalty throughout Europe, none of whom seem to have bothered to reply, Bourgeois (Desenfans had died earlier) left the collection to Dulwich College, stipulating that it should be on public display.

The Gallery concentrates on the Old Masters of the 17th and 18th centuries and there is some impressive art in the collection, including paintings by Rembrandt and Van Dyck. I’m no art expert but I enjoyed looking at several of the paintings on show, including Rembrandt’s famous Girl at a Window and a copy of Mrs. Siddons as the Tragic Muse by Sir Joshua Reynolds. There was a temporary exhibition of Andy Warhol’s pictures but I didn’t bother with that.