Light Show, the current exhibition at the Hayward Gallery on the South Bank, has been enjoying enormous popularity since it opened on 30 January. Tickets are selling out well in advance, so I decided to buy my ticket a couple of weeks ago in order to visit the exhibition yesterday. Setting my alarm for 8 am on a Sunday morning was torturous, but certainly worth it. 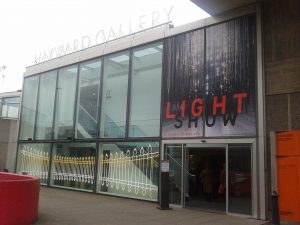 The exhibition explores the use of light to shape space and experiment with different forms. Installations encompassed clear and coloured lights, fluorescent strip lighting, bulbs (including one designed to represent moonlight), mini LED lights, sparkling effects and continuous illumination. Some of the installations were enclosed in different rooms. I was amazed, impressed and enlightened (excuse the pun) by the exhibition.

I had a number of favourite exhibits. One was the very first one I saw – Cylinder II (2012) by Leo Villareal. This consists of strips of LED lights (19,600 in total) arranged in a cylinder, which move in hypnotic and evocative ways. The lights are actually controlled by a computer programme, but they are stunning. Another was Anthony McCall’s You and I, Horizontal (2005). This is in a room of its own and a projector throws out a beam of light – essentially a light sculpture that you can walk through.

Another favourite was Ivan Navarro’s Reality Show (Silver) (2010). This is a small room with four doors, around the size of a telephone box. When you are inside you can look up or down and see mirrors reflecting rows of light endlessly, as if you are in a long column or pipe. You can see yourself in the doors, but outside the sculpture, others can see you inside – a claustrophobic and unsettling experience. Navarro grew up in Chile during Pinochet’s dictatorship and the installation echoes the surveillance and control inherent in the system.

One thing that both surprised and impressed me was the extent to which children seemed to be enjoying themselves. Personally it wouldn’t occur to me to take a small child to a modern art exhibition, but there were loads there on this Sunday morning and they were fascinated by the exhibits – from the small baby amazed by the twinkling lights to the little boys excited by the rooms of coloured light.

Light Show is on until 28th April. You will almost certainly have to book in advance, and I also recommend booking the first slot available and turning up as soon as possible – in theory you can arrive at any time during the hour stated on your ticket, but even with visitor limits the space can get very crowded and early arrival gives you the best chance of beating the crowds. I’m so glad I came here – I wasn’t sure if I was going to enjoy it, but I really did.