After the slightly lurid experience of The Clink my friends and I headed to the other museum we were interested in, The Old Operating Theatre Museum & Herb Garret. This small museum, which was boarded up for years and only rediscovered 50 years ago, is located near London Bridge station – handily opposite the pub we found to have lunch in. As the oldest operating theatre in Europe, it is a unique little museum and I had been meaning to come for some time.

The operating theatre’s location in the roof of a church seems odd, until you consider that St Thomas’ Church was originally alongside St Thomas’ Hospital, now demolished. The wards of the South Wing were built directly around the church, with the operating room encroaching into the church roof. Before 1822, when the theatre was built, women (men had a different ward and operating theatre) were operated on in the ward itself, which must have been highly unpleasant for all involved.

In 1815, the Apothecary’s Act stated that apprentice apothecaries must attend at public hospitals; this led to hundreds of students watching operations in this and other nearby theatres. Anaesthetics were only introduced in 1846, by which time this operating theatre had closed down. Therefore it is unique in representing a late stage in the history of surgery before anaesthetic.

When St Thomas’ Hospital moved to Lambeth in 1862, the Operating Theatre was partly dismantled and the entrances were blocked up. Despite minor references in academic publications, it was largely forgotten until 1956 when a researcher, Raymond Russell, decided to investigate. Following his discovery, a fundraising plan was launched to restore the space, which was officially opened in 1962.

Entrance to the museum is not for the faint-hearted or the mobility-impaired. You have to climb up a spiral staircase, located in the church tower, to reach the tiny foyer and gift shop. We had arrived in time for the 2pm Saturday talk, Speed Surgery! – a demonstration of surgical techniques in the nineteenth century – which I’d booked in advance via email as advised on the website. It wasn’t as busy as we – or the staff – expected, possibly because the weather outside was lovely and everyone was out enjoying the sun. 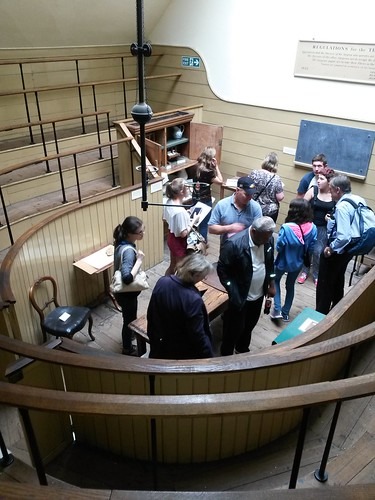 The talk was fascinating, and covered many aspects of surgery before anaesthetic and germ theory. We learned that most surgeons did not wash their hands before operating, and wore aprons that were covered in blood from repeated use. We also examined the operating table, with grooves to catch the blood and boxes of sawdust underneath to absorb the gore. Trainee surgeons could watch and observe operations – in the absence of anaesthetic, a surgeon had to be fast in order to cause the minimum amount of pain possible. While surgery in general was dangerous and had a low survival rate, some minor operations, such as the removal of gallstones, were performed with good rates of success.

We were shown a variety of surgical instruments – these were fearsome-looking, though well-made: surgeons would often have a set of instruments made specially which they would carry around in a velvet-lined case. Beautiful, sure, but not particularly hygienic. I knew some of what we were told as I had studied the “Medicine Through Time” module way back in my GCSE days, but some of it I had forgotten, and I learned some new things too.

During and after the talk we had the chance to admire the operating theatre itself, which was tiny and neat. Entrance was originally through the door at the back, now boarded up, which led to the hospital – not the spiral staircase, which is reassuring. This was the theatre for women – the men were operated on elsewhere. In the absence of electric light, this operating theatre, like many of the period, was located high up with large skylight windows, allowing for maximum natural light.

The museum itself has many interesting exhibits to do with the history of surgery and of the building, including fascinating photos of the area in the 19th and 20th centuries, and pictures of similar surgeries. There are numerous surgical instruments on display, as well as anaesthetic equipment and a section on children’s medicine, including a record of deaths in the area.

The “Herb Garret” aspect of the museum refers to the fact that when St Thomas’ Church was rebuilt in 1703, the large garret in the roof space was used by the St Thomas’ Apothecary to store and cure herbs. When the building was being restored, numerous herbs were found, including four opium poppies packed into the rafters. The exhibition includes many and varied herbs, with notes on what they were used for. There are also some notes on old-fashioned medical remedies – the most bizarre thing I learned was that in “ye olden days”, pregnancy tests were carried out by injecting a frog with the expectant woman’s hormones. If she was pregnant, the frog would lay eggs.

The Old Operating Theatre & Herb Garret is a fascinating small museum that is definitely worth visiting. As well as the talks during museum hours, there are occasional special events – see the website for more details. Please note, however, though the museum has a gift shop there is no refreshment area and there are no toilets – so maybe pay a visit to the pub across the road before you go in!