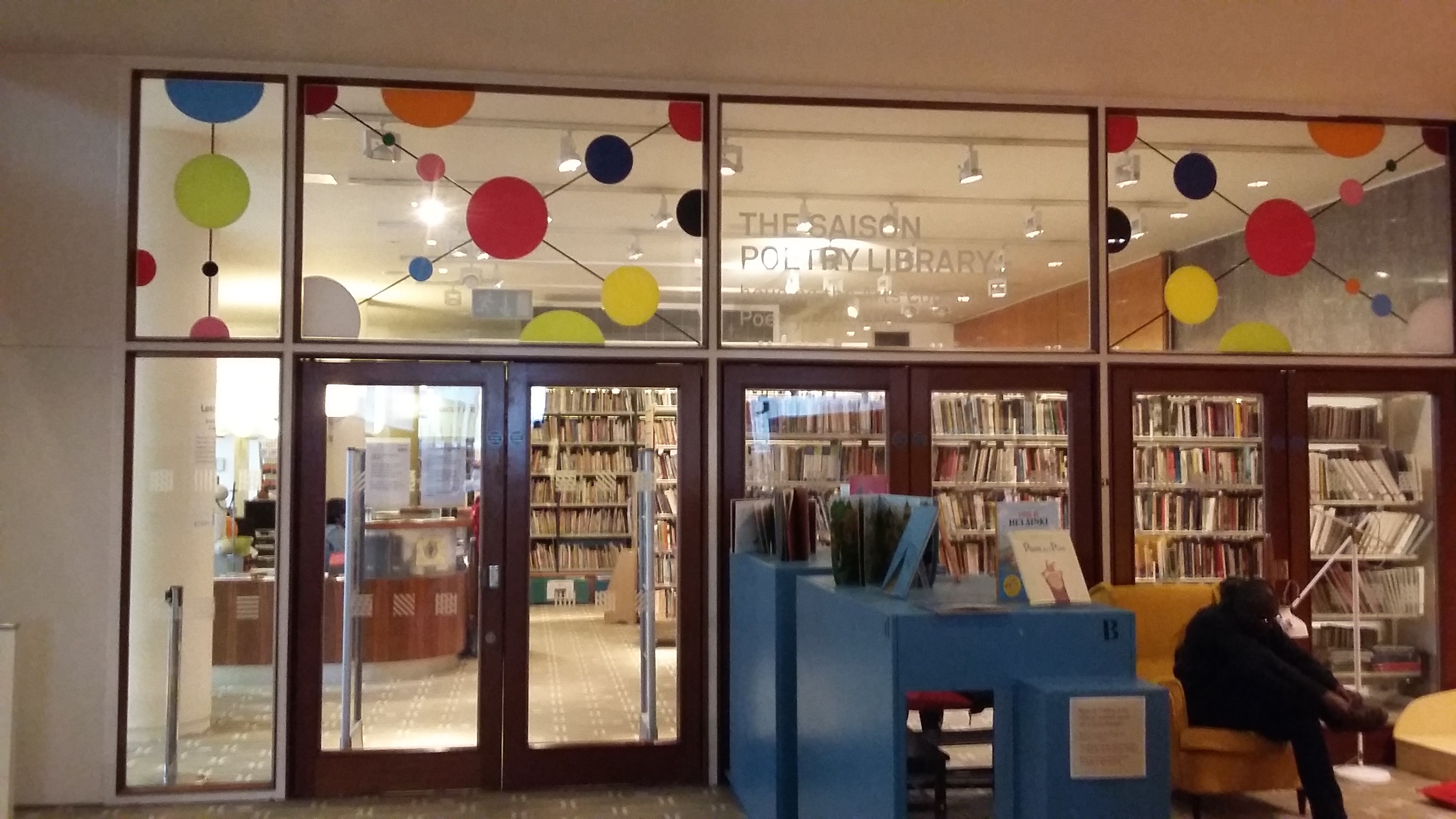 I love the Southbank Centre and I love poetry, so the Poetry Tour was an obvious choice. I went along with some friends and we met inside the Poetry Library for 6pm.

The tour was led by Chris McCabe, librarian and poet. It began beside the sculpture of Dylan Thomas’ head, situated inside the library. It is the only sculpture made from life, by Oloff de Wet, and was discovered in the basement several years ago. It was unveiled on the 50th anniversary of the poet’s death in the Poetry Library as a natural home for it. Chris read out some of Thomas’ words about the South Bank as a fitting tribute.

We headed outside, gathering by the poetry stones that were laid in the pavement when this area was constructed. These include some words from Wordsworth, who didn’t particularly like the area, preferring his native Lake District. 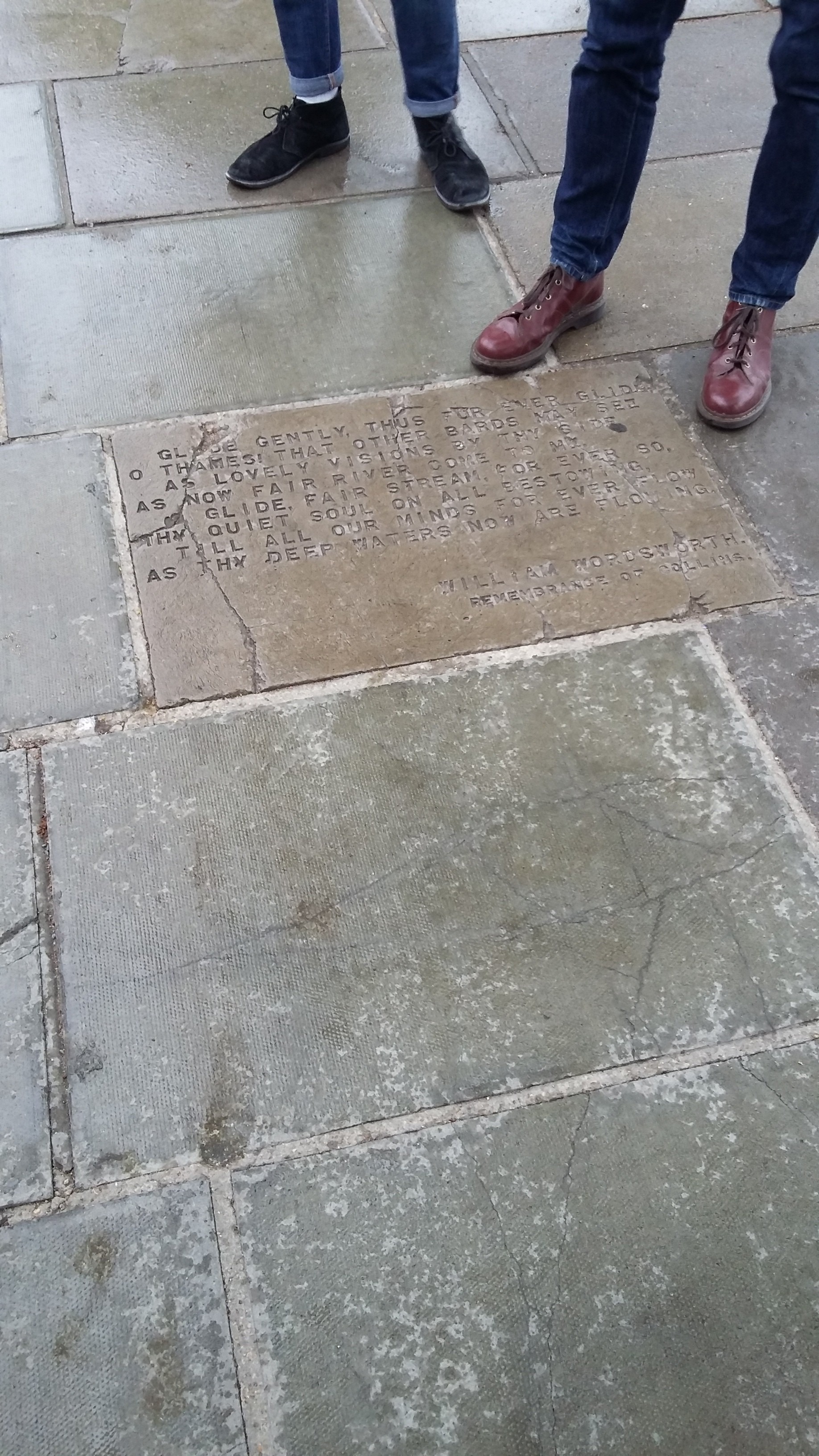 We also heard about the Lion Brewery that used to occupy the site, and about the murder committed here by William Chester Minor. Minor was committed to Broadmoor, and became one of the most prolific contributors to the Oxford English Dictionary, responding to an advert asking for help – let’s face it, he had plenty of time on his hands. The creators of the dictionary had no idea that their helpful contributor was a notorious murderer.

Heading inland from the river, we heard about poet Arthur Rimbaud, who lived nearby (where the BFI Imax is now) in 1888. Stabbed by his lover Paul Verlaine after an argument, he left Camden and returned to France before coming back to London.

We were given audio headsets at this point, and listened to poet Tom Chivers as we explored the area south of the river. We walked by the Waterloo International section of the station, no longer in use, and passed under the station through a graffiti-strewn tunnel. 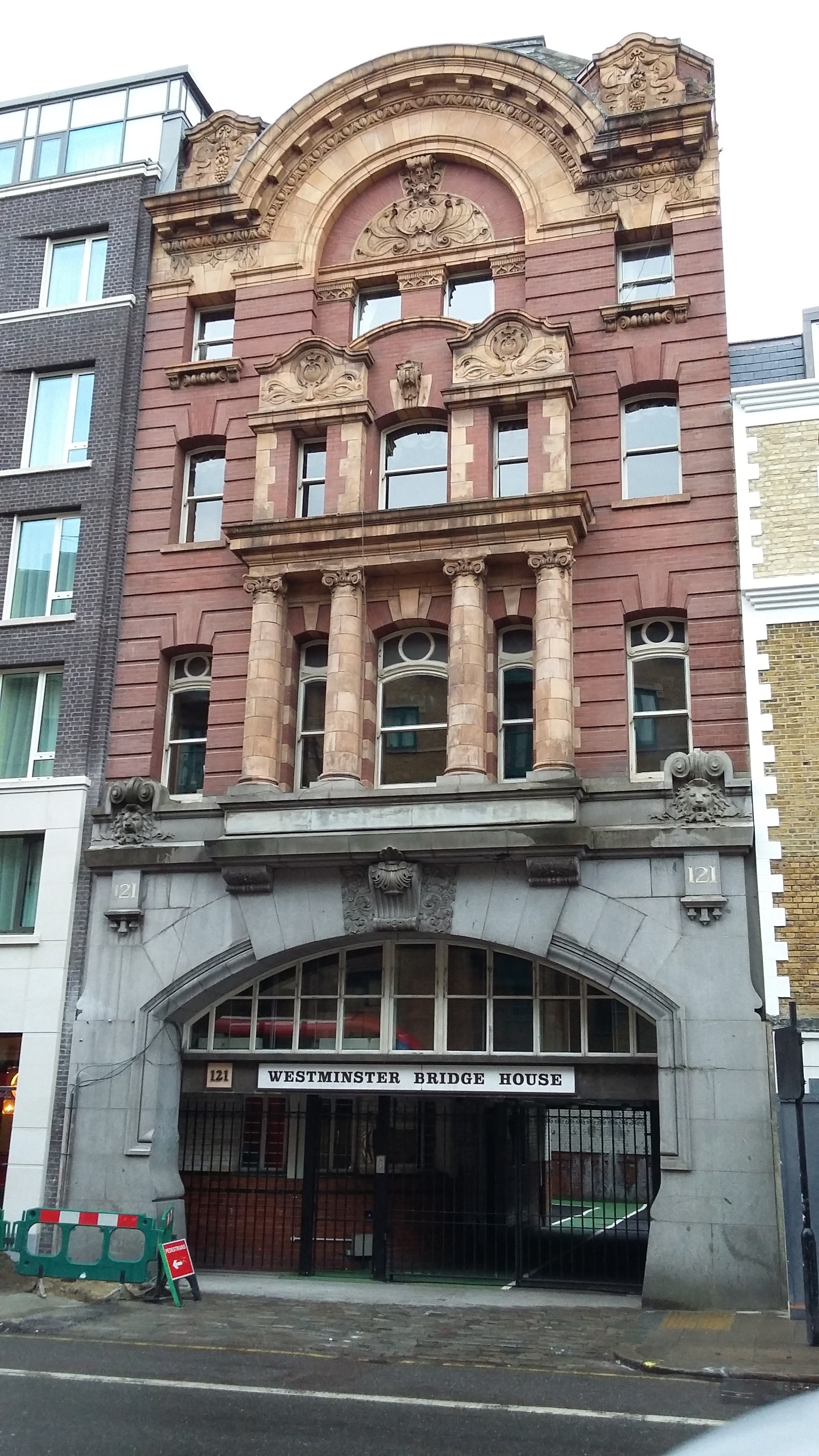 Along the way we stopped at the point where the former Necropolis Railway depot still stands. This station took coffins and mourners out to Brookwood Cemetery near Woking, with first and second class carriages for both the dead and the living. 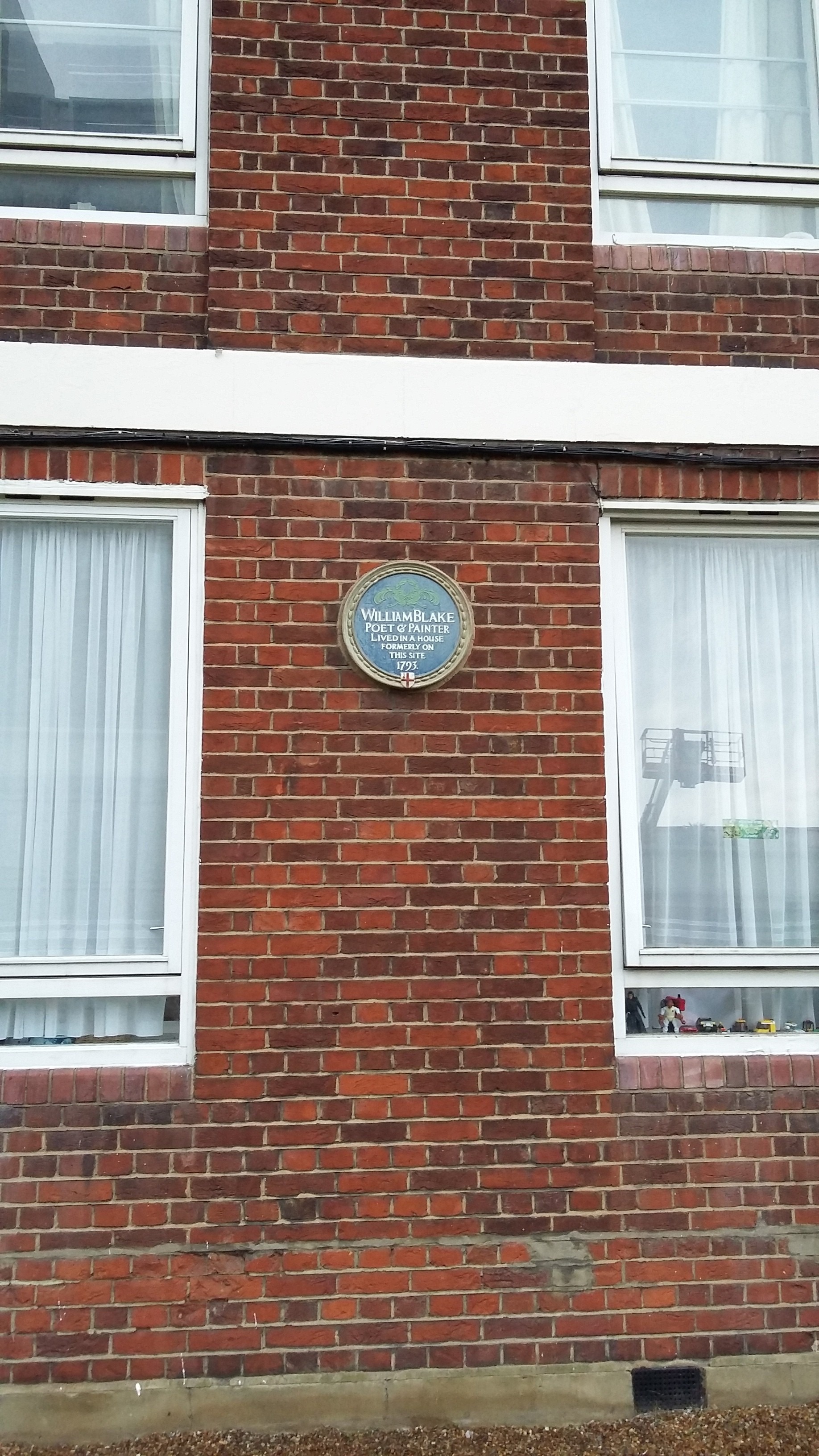 A little further on and we were standing outside the location of William Blake’s former home in Lambeth, where he lived from 1790 to 1800. His time here was one of great personal happiness for Blake, though he was still deeply concerned about the state of the world: he created his Songs of Experience here. In a nearby tunnel are some utterly stunning mosaics, based on Blake’s poetry and illustrations. They are incredibly detailed and really show the range of his imagination. 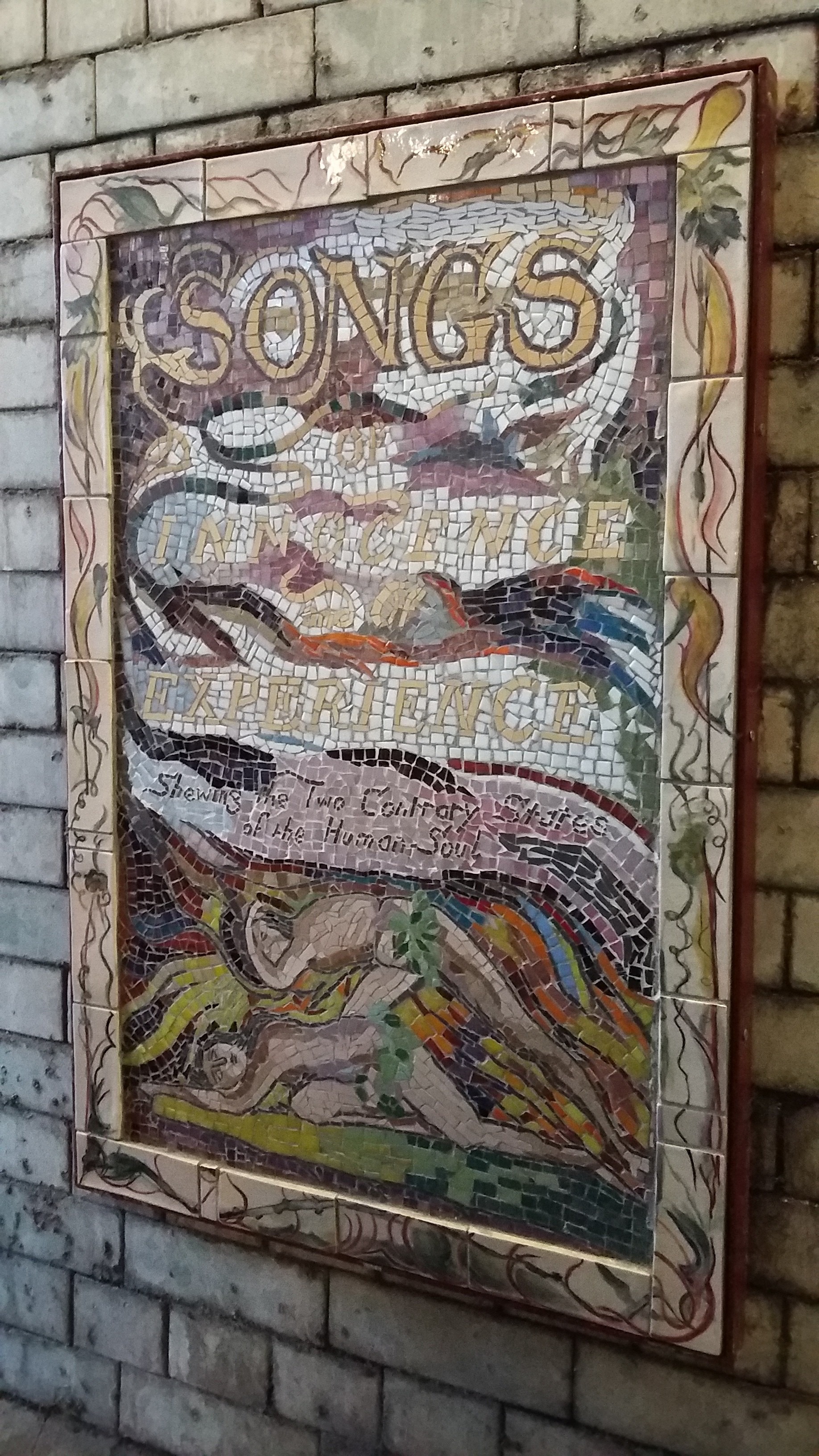 A short walk and we were back to the river. We stopped by Westminster Bridge, because the lion statue from the Lion Brewery is now here. The brewery was bombed during the Second World War, but the lion somehow survived. 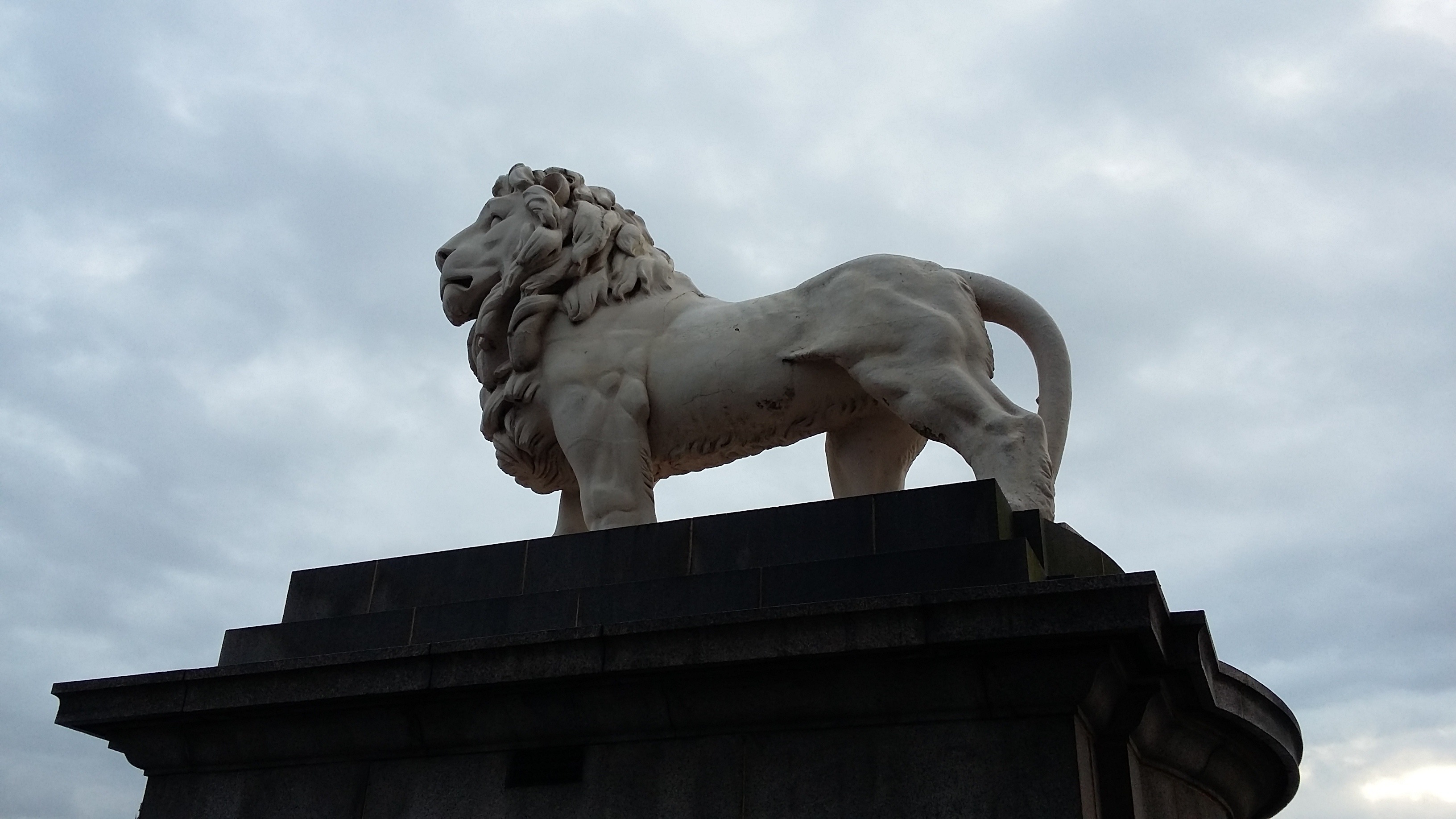 We continued on the south bank, stopping at the final poetry stone with a quote from TS Eliot, before returning to the Poetry Library. 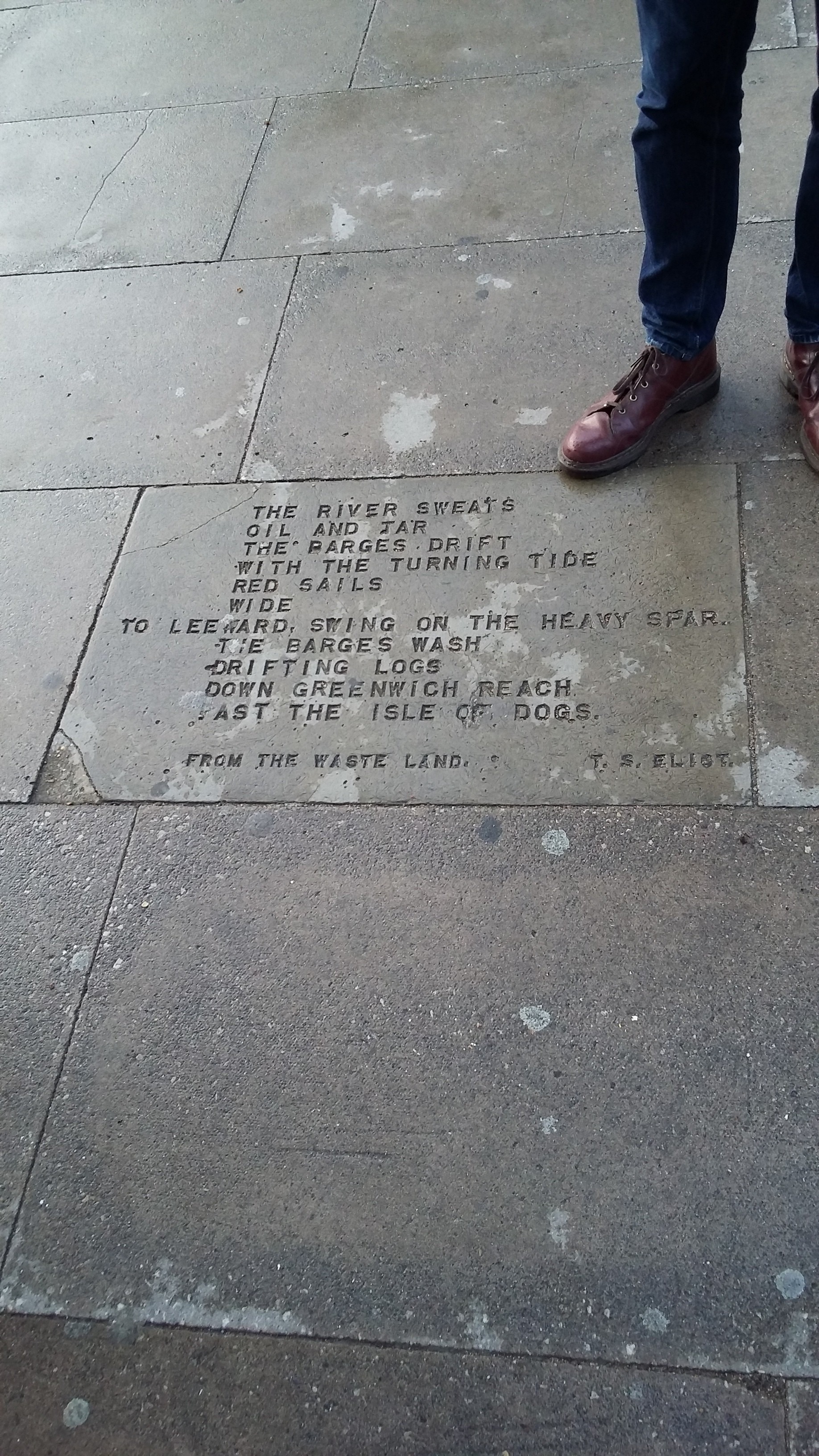 This week has seen the Dylan Thomas in Fitzrovia festival happening in central London, based around the part of Bloomsbury where the writer used to hang out in the middle of the century. Talks, readings and performances have all been taking place, and I have booked to see Clown in the Moon, a performance about Dylan, tomorrow. Yesterday I took advantage of the fact that I work incredibly close to the area where the festival is taking place, and popped out to see Dylan’s writing shed, which is on tour around the country.

The shed is a near-exact replica (it has been scaled down slightly to allow it to be transported around the country on a trailer) of Thomas’ real writing shed in Laugharne. It is full of bookshelves, papers and other odds and ends, with Dylan’s coat draped over the back of the chair – just as if the poet himself could come inside at any moment.

I managed to catch the King’s College exhibition about Byron just in time – it closes on Wednesday. The exhibition is displayed in the beautiful Weston Room, part of the Maughan Library, and was curated by the Foyle Special Collections Library of King’s College London and the John Murray Archive of the National Library of Scotland, for the 39th International Byron Conference in July (there’s an International Byron Conference! How awesome!).

I wanted to see the exhibition for two main reasons. One: it is full of manuscripts and rare books, which are always interesting. Two: it’s Byron! I have a bit of an obsession with the man, so there was no way I was going to miss this.

‘Byron and politics’ takes a slightly different look at the “mad, bad and dangerous to know” poet’s life, focusing on his political life and bringing together manuscripts, letters, printed editions and several of Byron’s personal possessions. The exhibition explores the contradictions in the poet’s thought and life: he hated the ruling Tory party but also disliked their opponents the Whigs; he was an aristocrat with a seat in the House of Lords, yet he spoke up for the poor and needy, notably in his Parliamentary speech in which he championed the cause of the Nottinghamshire Luddites; he was in love with the idea of democracy yet refused to admit the poor he knew to be capable of taking part in it. Byron greatly admired Napoleon and was overwhelmingly disappointed when he chose exile over  a ‘noble death’. He himself met his end in Missolonghi, Greece, fighting for the cause of Greek independence.

For someone whose reputation is of a wild, wicked, immoral and frivolous poet, Byron’s deep engagement with the political issues of the day are something of a revelation. This aspect of his life shows, perhaps, a deeper side to his character and a more serious one. He also seems to have had a strong sympathetic understanding of the less fortunate, though ultimately he refused to side with any one party or way of thinking, preferring to form his own views. I took a copy of the exhibition guide, so that I can revisit this aspect of Byron’s life in the future.