It’s been several years since I’ve seen the Lord of the Rings trilogy, so I thought it would be a good time to refresh my memory. The Prince Charles Cinema holds all-night marathons every December, and I went along armed with snacks and energy drinks.

The marathon featured all three films, in extended editions, over a period of more than twelve hours with minimal breaks. It was less of an endurance test than I’d expected (the energy drinks helped), because the movies are so good, and still hold up well twenty years after they were first made. Boromir’s “One does not simply walk into Mordor” line got a particular laugh.

When the final credits rolled I went for a Wetherspoon’s breakfast and went back home, where I spent the whole day sleeping. 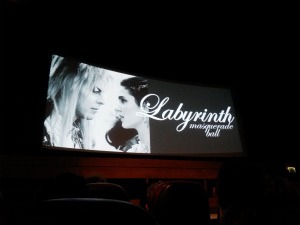 I’ve wanted to go to one of the Prince Charles Cinema‘s famous Labyrinth Masquerade Balls for a while, but it wasn’t until the sad death of David Bowie recently that I was finally prompted to go, along with some friends. The Masquerade Balls are designed for die-hard fans of the film (that’s definitely me): attendees are invited to dress up (although I didn’t do this!), sing along, cheer and generally take part in the action.

On entering the auditorium you are given a little goodie bag: I won’t give away the surprise, but you need to keep it handy as the various things inside it will be used at different points in the film. Once seated, you get to enjoy a bit of pre-show entertainment, including a judging contest for those people who did turn up in costume. And then the film begins!

I usually hate it when people talk, sing or move around in the cinema, but this kind of event is completely different – everyone there knows the film back to front anyway and the emphasis is on enjoying it as a community. I have to admit I did really like this way of enjoying one of my favourite films! Of course, I could have stayed at home and watched it on DVD for free – but then I wouldn’t have got to experience the atmosphere. An entire roomful of people singing “Dance Magic Dance” is not to be missed!

I definitely recommend the Labyrinth Masquerade Ball for any fans of the film. They do run fairly frequently, so check out the cinema’s website.