I’m hugely interested in Russian culture, and so the National Portrait Gallery‘s exhibition Russia and the Arts: The Age of Tolstoy and Tchaikovsky was an absolute must-see for me. The exhibition features pictures loaned from the State Tretyakov Gallery in Moscow, paintings of some of the greatest cultural figures Russia has produced, including writers, artists, actors, composers and patrons. It’s also possible to trace the development of Russian art through the exhibition, as it covers the period 1867 to 1914, and features Realism, Impressionism and Cubism.

This relatively small exhibition had several highlights for me. Ilya Repin’s portrait of composer Modest Mussorgsky, painted in 1881 just a few days before Mussorgsky died of alcoholism, is powerfully unnerving. The picture Tolstoy shows the great writer relaxing at his home, while the portrait of Turgenev is urbane and smart. The 1872 portrait of Dostoyevsky by Vasily Perov is familiar to me from the cover of the author’s works, and portrays the author as pensive and gaunt. I think my favourite, however, was the 1898 portrait of Anton Chekhov by Iosif Braz. Intellectual and intelligent, the writer stares out of the painting as if challenging the viewer. I kept returning to this picture as I was going round the exhibition. The show was small in size, but contained more cultural giants than any other I’ve seen.

Burning News: recent art from Russia is an exhibition in the Hayward Gallery‘s Project Space. It actually closed on Sunday, but I managed to pay it a visit before then.

The exhibition consisted of sculpture and photography by Aslan Gaisumov and Tim Parchikov, as well as videos by Evgeny Granilshchikov, Mikhail Maksimov, Sasha Pirogova and Dimitri Venkov. There was an interesting variety of work on show, and I’m not sure it was really my thing (except for the burning of the newspapers), but it was a thought-provoking way to pass some time.

On Saturday I attended a performance of Muse of Fire at the Globe. Afterwards I decided that, as I was right next to the Tate Modern, I would go in and see their new exhibition, Malevich: Revolutionary of Russian Art.

Kazimir Malevich (1879–1935) was an influential and radical artist whose work spanned one of the most eventful periods of Russian, and world, history. This retrospective examines his life’s work, which culminated in his most famous example of suprematism, the Black Square. I must admit I might not have seen the significance of this work, if I hadn’t discovered that it had been banned by the Soviet authorities. Anything deemed worthy of banning surely has some merit. In fact, when I actually saw the picture, I found it strangely compelling and unsettling, like a black tunnel, or a void. I could never have anticipated reacting like this to such a painting.

Suprematist work was, however, only one facet of Malevich’s work as an artist. Over the course of his life he explored landscape, religious painting and images of Russian workers, in both figurative and abstract styles. His range and versatility is clearly on show in this rich exhibition.

The exhibition runs until 26 October.

Sergei Chepik (1953-2011) is regarded as one of Russia’s greatest painters, which made me want to see a retrospective exhibition of his work at the Mall Galleries in central London. I was not disappointed.

Chepik’s work could easily belong in the Russian Museum. It is visionary, beautiful and distinctive. The artist painted religious scenes, images from his native Russia, and pictures inspired by his later home of Paris. His religious images are bleak, almost fantastical, unsettling, and moving even to an atheist (which he was himself). Many of them were based on or evoke events from Soviet Russia.

Chepik also drew on folk tales for some of his works: a painting I particularly loved showed the puppet-figure Petrushka (the Russian representation of autumn) surrounded by Russian folk figures. Other images covered sinister clowns and other circus characters, book illustrations (including for Bulgakov’s The White Guard) and portraits.

This exhibition was free and I’m so glad I went – it seems Russians still make the most awesome art!

The bizarre title of this exhibition drew me to the Saatchi Gallery on Sunday, as did the fact that it consists of new art from Russia – I am fascinated by anything Russian so Gaiety is the Most Outstanding Feature of the Soviet Union was on my must-see list.

This despite the fact that modern art is certainly not my forte. Still, I enjoyed my previous visit to the Gallery – rather to my surprise – and resolved to keep an open mind. Some of the exhibitions were lost on me, such as odd sculptures; some weren’t to my taste, but I could appreciate the thought that went into them and the humanity that lay behind them, such as Sergei Vasiliev’s photographs of tattooed prisoners and Boris Mikhailov’s pictures of the homeless in Ukraine, illustrating the disintegration of society in a post-Soviet world.

One of my favourite displays was this piece by Daria Krotova, bringing to mind the works of Dostoyevsky and Gogol and seemingly concerned with the recession and the culpability of those in positions of power. 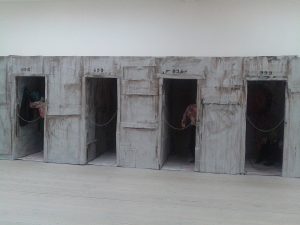 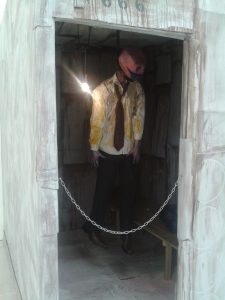 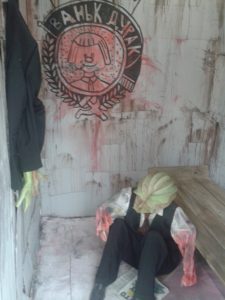 I also loved these pictures by Valery Koshlyakov – made from cardboard and roughly-applied paint, they are striking and beautiful.

The exhibition is running until the 9th of June.

Breaking the Ice: Moscow Art, 1960-80s
While I was at the Gallery I also dropped in on the exhibition upstairs, which continued the Russian theme by displaying Moscow art from an earlier period. I found this harder to get into, but I did like this image which juxtaposed Lenin’s face with an easily recognisable advertising logo. 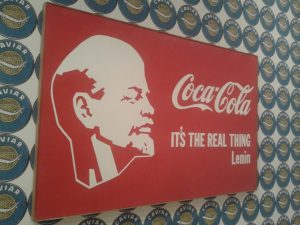 This exhibition is on until the 28th of March.