The other weekend I decided to complete my exploration of the Central Line by visiting the final station on my list, Epping. Epping is right at the end of the line at the eastern side, in fact it is actually in Essex. It wasn’t always the end of the line though, in fact the Central Line used to terminate at Ongar. You can still see the tracks extending out from Epping station, although they have partly been taken up.

The line from Ongar to almost Epping Station still exists, though, and in recent months a heritage railway has been introduced on the line. This runs between North Weald and Ongar, with another branch extending from North Weald to the end of the remaining track near Epping. The eventual plan is to join up the track again at Epping, and build another station near the existing Epping station to accommodate the heritage railway. In the meantime, a heritage bus service – including both red central London buses and the green ones that were used in the outlying districts – shuttles passengers between Epping and North Weald stations, and are included in the price of your ticket (which is valid all day). The railway itself uses both steam and diesel trains, and I was able to ride on both during my day out.

The Epping Ongar Heritage Railway is a fun day out for the whole family: I saw lots of children who seemed to be enjoying themselves, as well as adults who just wanted an escape from busy modern life. The towns of North Weald and Ongar are sweet, too (but don’t go on a Sunday like I did – nothing is open). I look forward to seeing how it develops in the future, particularly when the awaited extension to Epping is complete.

I make no secret of the fact that I have a bit of an obsession with the Tube. So, it seems, do plenty of other people, given the popularity of the heritage train trips that have taken place over the last couple of weekends. I entered the ballot and was lucky enough to be allocated a ticket for Sunday night’s run from Kensington Olympia to Moorgate. I was sent the details in the post, including this beautiful purple celebratory ticket. 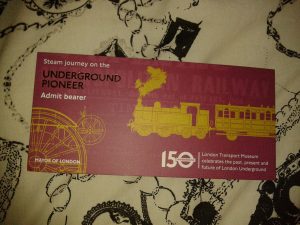 This journey involved being pulled by the steam locomotive for the first few minutes, after which the train moved in the other direction towards Moorgate, pulled by the electric locomotive. I chose this journey because of the price – £50 as opposed to £150. This way I was able to experience a steam journey as well as an electric one.

I spent Sunday exploring some tube stations in the north before heading to Kensington Olympia station about an hour before I needed to – I was so paranoid in case I was late. I had time to get a coffee  and sit down for a bit, which was just as well seeing as I was going to be spending a lot of time in the cold!

I got back to the station at 5.20 on the dot as the letter had instructed. There were several people milling around already. I had been worried in case the trip was cancelled due to the snow, but this didn’t happen. We had to register at the table corresponding to our carriage (mine was D), and received a wristband, the kind you get when you go to a gig.

After that, it was a matter of waiting for the train to arrive. A couple of District Line shuttle trains from Earl’s Court arrived first and the passengers seemed rather puzzled to find so many people lined up on the platform. It was pretty cold, and it was snowing, but there wasn’t much shelter, so everyone was a bit squashed huddling under the canopy.

Eventually the train arrived and I clambered into my carriage. I was pleased to get a window seat. The train began to move and whistled loudly. Several people armed with cameras waved us off from the road. 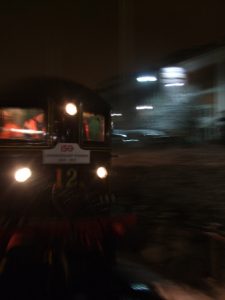 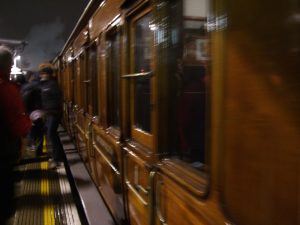 The journey was brilliant. I imagined myself as a nineteenth-century passenger travelling on the Underground. The smoke flew past our carriage, clouding our view of the tunnel walls. I can imagine that this experience would have been none too pleasant one hundred and fifty years ago, with open windows and even more smoke.

I recorded a video showing the train on its way through Earl’s Court station:

At every station along the route, from this one to West Kensington where we changed direction, right through to Moorgate via Bayswater, Paddington, Farringdon and Barbican, there were crowds watching and taking photographs. Some people had obviously come prepared with cameras, others appeared bewildered at the sudden appearance of this historical relic. They waved, and I waved back, feeling rather like royalty!

All too soon, it seemed, the train reached Moorgate. Here, we had the chance to take pictures of the train before it set off on its next journey. I took full advantage of this opportunity. I was pleased that one of the brand new Hammersmith & City Line trains was standing alongside the heritage train: an impressive juxtaposition of the old and the new. 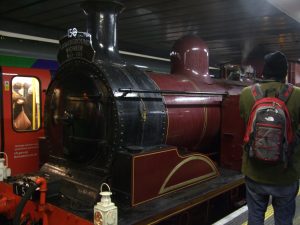 I had a brief look round the London Transport Museum pop-up shop; I didn’t buy anything but I made a mental note of several items to purchase later.

I know spending £50 on an Underground journey sounds crazy, especially since I could use my Travelcard to travel along this stretch of track whenever I like. However I don’t regret it at all: it was a once-in-a-lifetime experience and a journey back into the Underground’s past.