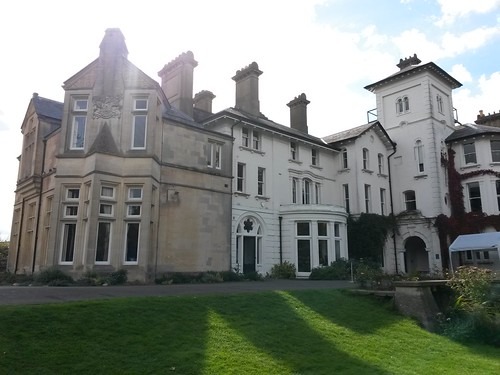 It’s September, so that means it’s time for Heritage Open Days – the weekend where lots of museums and galleries across the country open their doors, some for the only time each year, to visitors. The programme excludes London – the London Open House event is the following weekend – so I scanned the map for something to visit near me. I was surprised to find Stephens House and Gardens on the list, as it is located in Finchley, near Finchley Central Underground station – last time I looked Finchley was a London borough, but I was happy enough to have the chance to visit this weekend. It wasn’t a place I had ever heard of, so I was intrigued.

Stephens House was the home of “Inky” Stephens, a manufacturer of ink and stationery products who lived in Finchley and owned and developed Avenue House – now Stephens House – from 1874 to 1918. He bequeathed it to the people of Finchley “for the use and enjoyment of the public”, and though the council didn’t seem to know what to do with it for a long time, they eventually decided to work on opening the house and gardens to the public. The house is now Grade II listed: it is an events venue, office space for various small businesses, and the home of the Stephens Museum. It is open to the public once a month on Open Sundays, while the vast and beautiful gardens are open all year round during daylight hours.

I entered at the bottom of the garden, coming across the Bothy before anything else. This is a quaint building with lots of character and a beautiful garden. I was lucky to see it because the gardens are normally open only on Fridays.

Next I made my way up to the house, passing the statue of Spike Milligan on a park bench (Milligan lived in Finchley and was an active member of the local community) nearby. The house is a beautiful Victorian creation; what was once the front is now the back, and the “back” has been converted to the front of the house – it’s easy to see why. There is currently an exhibition in the basement, Avenue House at War, which looks at the history of the house during the two world wars: in World War I it was a hospital and during World War II it was the headquarters of the Finchley ARP. An escape tunnel is visible in the basement: this was put in place in case of the house being bombed.

I had a look at the Stephens Museum, home of the Stephens Collection which was established by the Finchley Society. Located in the conservatory, it examines the life of Dr Henry Stephens FRCS (1796-1864), the inventor of the blue-black writing fluid that made his name, and his son Henry “Inky” Stephens, MP for Hornsey and Finchley, who bequeathed the house to the public. It also looks at the development of the Stephens Ink Company and the history of Avenue House, as well as the wider context of the story of writing from ancient times. The Company was first registered in 1832 and was a household name for 150 years; it was used by people all over the world, and was even taken to Antarctica by Captain Robert Scott.

I joined a guided tour, which took us round the side of the house, the basement and even upstairs, where we got to go up the tower (now an artists’ studio) and look out over the grounds.

Stephens House and Gardens is a lovely place to visit and if you happen to be in Finchley I would certainly recommend popping in.