As part of my project to visit every tube station in London (in which I am including both the Overground and the DLR, since they are on the Tube map), I decided to tick off a few on the DLR (the Docklands Light Railway) on Saturday.

I decided to start at the bottom and work my way up, so I got the train from Charing Cross to Woolwich Arsenal, the only DLR station in Zone 4. The area – known as Royal Arsenal – was historically where weaponry and munitions were built from roughly Tudor times up until the Second World War. There are still buildings in existence that were once part of this area, including the Royal Arsenal Gatehouse.

I visited Greenwich Heritage Centre which has a small exhibition about the development, heyday and decline of the area, which is no longer home to factories but is being redeveloped as a residential area: numerous new and converted flats are dotted around. The area is situated by the river and there are some fabulous views towards central London and downriver. 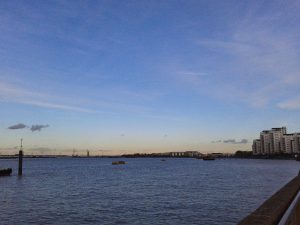 I also went to Firepower: the Royal Artillery Museum. As the name suggests, this was all about artillery and weaponry which I can’t say interests me a great deal, although I was amused by the party of little boys marching to the orders of an army major (I think they were having a birthday party or something).

From Woolwich Arsenal station, I took the DLR north under the Thames, first to King George V station (which is in a largely residential area) and then to Pontoon Dock, which is right next to the Thames Barrier and its accompanying park.

Subsequently I got off at West Silvertown, the most notable feature of which is the Tate & Lyle factory, decorated with a large model of a golden syrup tin. To complete my journey, I went north and got off at Stratford High Street, walking through a shopping centre (not Westfields; the other one) to catch the Central line at Stratford.