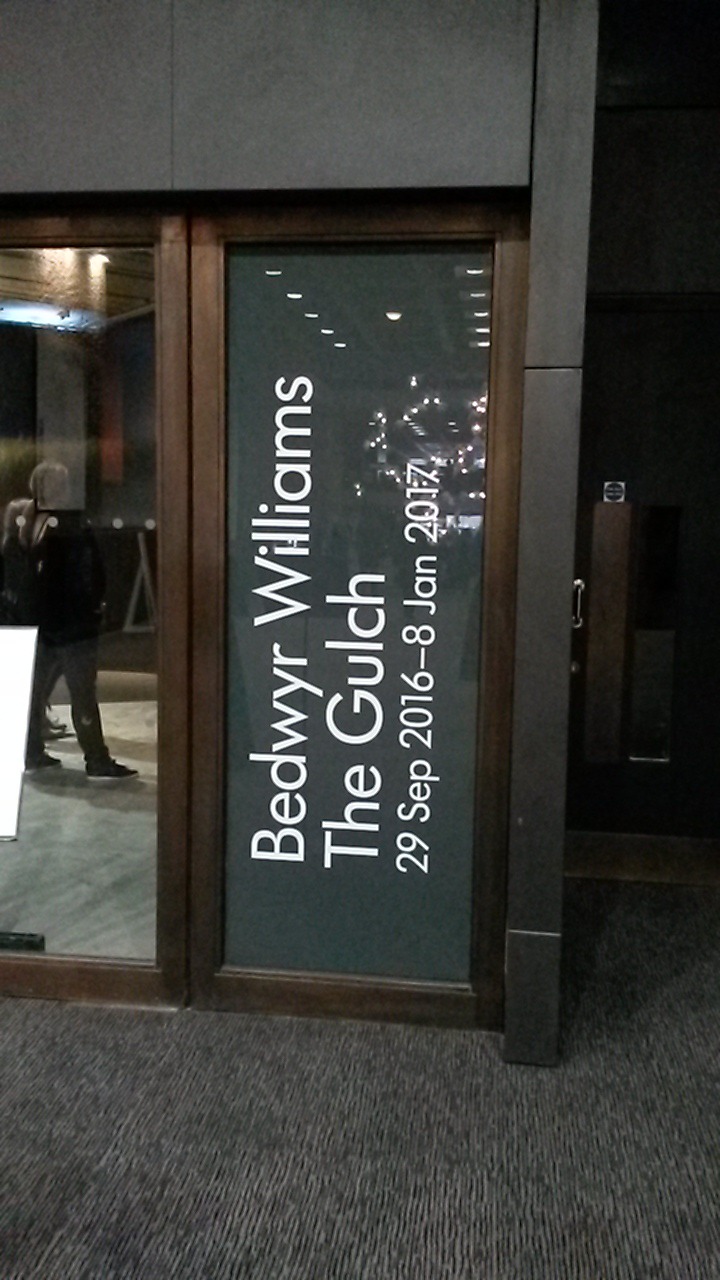 At the end of November I attended an afternoon of talks at the Barbican taking Bedwyr Williams’ exhibition in The Curve, The Gulch, as a starting point. Held in the Fountain Room, I thought the talks sounded quite interesting and I’m always up for learning new things.

The first talk, on taxidermy, was delivered by Errol Fuller, whose topic was inspired by the presence of a taxidermied goat in the exhibition. He suggested that taxidermy is one example of the smudging of boundaries between life and death. During the Victorian era, taxidermy was used to strong effect in science – for instance, Darwin’s finches which demonstrated the differences between species – but it was also fashionable to use it as decoration in the home. Creatures were often posed and arranged as though in performance: playing cricket, making music.

Taxidermy has been out of fashion for many years, but recently it has started to increase in popularity, with a growing interest in natural history and the ethical sourcing of dead animals to use. Courses are particularly popular among young women aged 15-30, while taxidermied animals have begun to appear in artworks, such as the suspended horse in the Guggenheim.

The golden age of taxidermy spanned from the nineteenth century up to the outbreak of World War One. Every town had its own taxidermist, and nowadays many are famous according to their name and town, such as Hancock of Newcastle. George Ashmead, who created a case of 300 hummingbirds, had business premises in Grosvenor Square, while Roland Ward, famed for his lion biting a bison, had premises in Piccadilly. Between the 1930s and the 1970s many good examples of taxidermy were destroyed, even by curators, as they were out of fashion and seen as valueless.

What was nineteenth-century taxidermy about? Two aspects were particularly popular. One was anthropomorphic taxidermy, primarily for amusement, such as tableaux of fencing mice. Another was the use of animals now extinct, such as the passenger pigeon, native to North America and once the commonest bird on earth. Another example is the Great Auk, of which around 65 examples remain stuffed in museums. Hooiers from New Zealand are the only birds in which the males and females have different beaks, but they became extinct in 1907. The heath hen was common when stuffed in 1880 but has since become extinct: it was stuffed to look dead, and Fuller ends his talk by suggesting that it has now become conceptual art deeper and more profound than actual conceptual art.

The second talk, on magic, was given by Jon Armstrong. He started off with a card trick involving members of the audience, and pointed out that a deck of cards has multiple meanings, with cards relating to the days of the year, the seasons, and more. He discussed the practice of magic as performance art, citing the Davenports, late nineteenth century magicians who had a black box theatre, and the magician Kirby who wrote as far back as 1972 on the relationship between magic and theatre. He discussed The Conjurer by Hieronymus Bosch, a work which portrayed magic as an ancient art, and the theatrical tricks that could be seen as magic, such as flying machinery and the ancient mystery plays that had a “hellmouth” on the stage.

At this point there was a break in proceedings, and I took the chance to go and check out the exhibition, The Gulch. This immersive exhibition in The Curve started with a moonlit beach, on which a sole shoe rested beside a camp fire. It then moved into a small gallery space with a couple of displays, including a chair with a winding road drawn on the back. Next I entered a “backstage area” of boxes, drums and beanbags, that could be before or after a performance.

A boardroom, with a long table and a large screen, followed, with a video of a self-confessed depressed hypnotist followed by a taxidermied goat in a bare room with a microphone. The exhibition ended with a curved stretch of race track on which another shoe could be seen.

I have no idea what any of it meant, but I liked it – I got the sense of someone having just left, an empty space that had been in use until a few seconds ago. I felt as though I was stepping into a story each time I moved into a new space.

The third talk was delivered by Dr. Georgina Guy, who compared aspects of the exhibition to other art exhibitions and installations, relating theatre, exhibition and curation to one another as they are displayed and performed. Unfortunately a lot of her talk went right over my head – as an academic I don’t think I was the right audience for what she was trying to say.

The final talk was possibly my favourite: Christopher Green spoke about the science and showbiz of hypnosis. He read about Victorian hypnotists in the British Library and investigated the relationship between hypnosis, theatre and healing, and how many “serious” hypnotists who want to help people end up using the tricks of “stage” hypnotists. I was particularly interested to learn about the famous female hypnotist, Anne de Montford, the daughter of a millworker, though there were plenty of other fascinating characters, including Henry Blythe the stage hypnotist, who hypnotised his daughter to pass her driving test – and she failed. Green was an incredibly engaging speaker and really sparked my interest in a topic I’d never paid any prior attention to. Overall, a fascinating afternoon.