Hallowe’en is the perfect time to visit a cemetery; besides, I never did get to go on a proper tour of Tower Hamlets. So I was happy to book a place on the All Hallow’s Eve by Lamplight tour, run by the Cemetery Club. 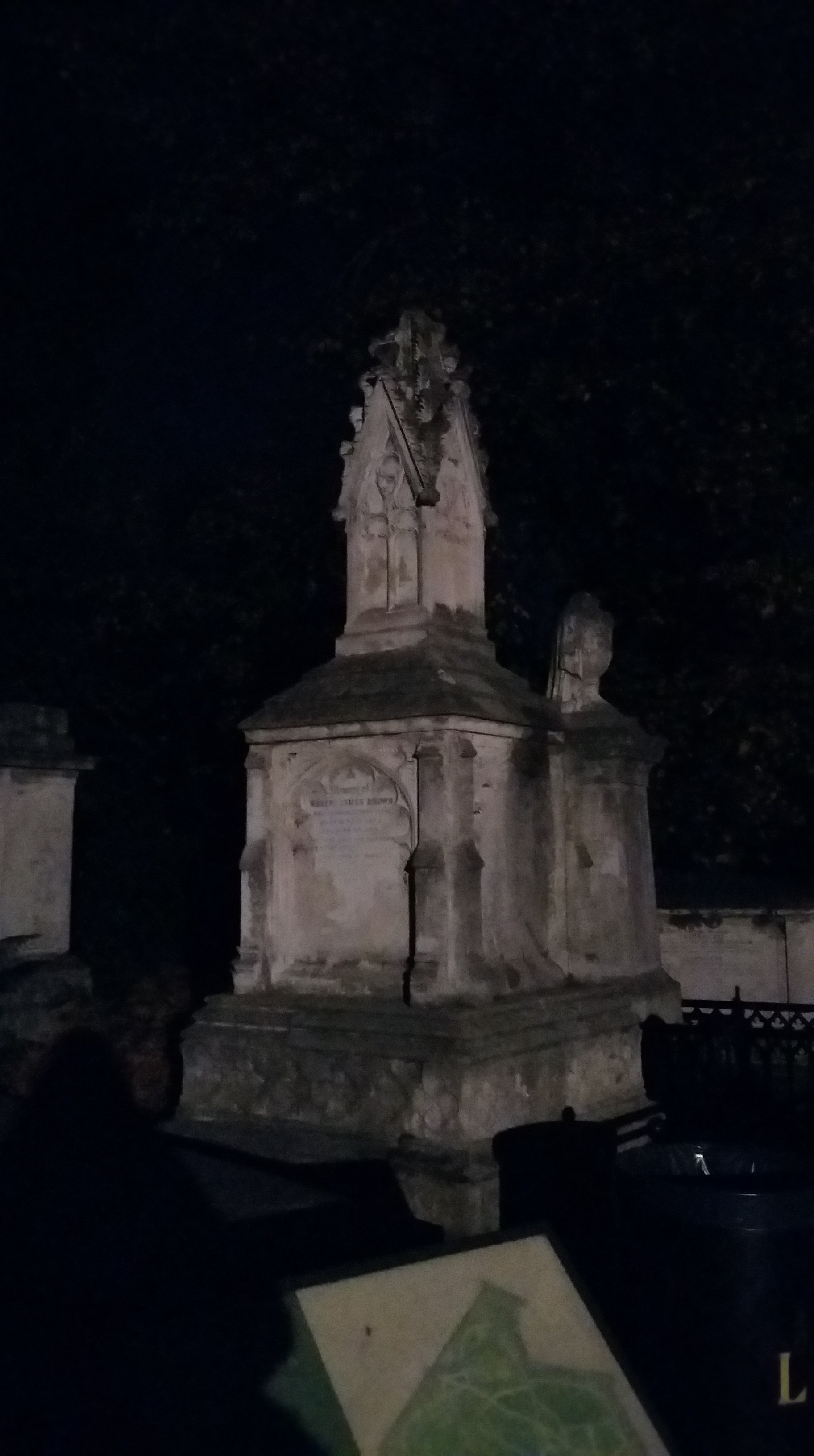 We gathered at the entrance by the war memorial and collected some lanterns to take with us on our walk. And we needed them – there are no other lights in the cemetery, and even with the lanterns it was pretty dark. (I apologise for the poor quality of these photographs – I tried with and without flash and they were both pretty dire). Our guides escorted us round the cemetery, stopping at various points to tell us about various notable people buried here.

Towards the end of the tour we enjoyed some soul cakes of the kind eaten at Victorian Hallowe’en – they were baked to an original Victorian recipe and were yummy – spicy and delicious. We learned about nineteenth century Hallowe’en traditions and superstitions.

Finally, we were treated to an original Victorian music hall song, originally sung by Alexander Hurley, and based on a real event involving a strongman defeated by a daring rival.

Sadly I didn’t see any bats on the walk – perhaps because they were all frightened off by the fireworks. However it was a fascinating and atmospheric walk. 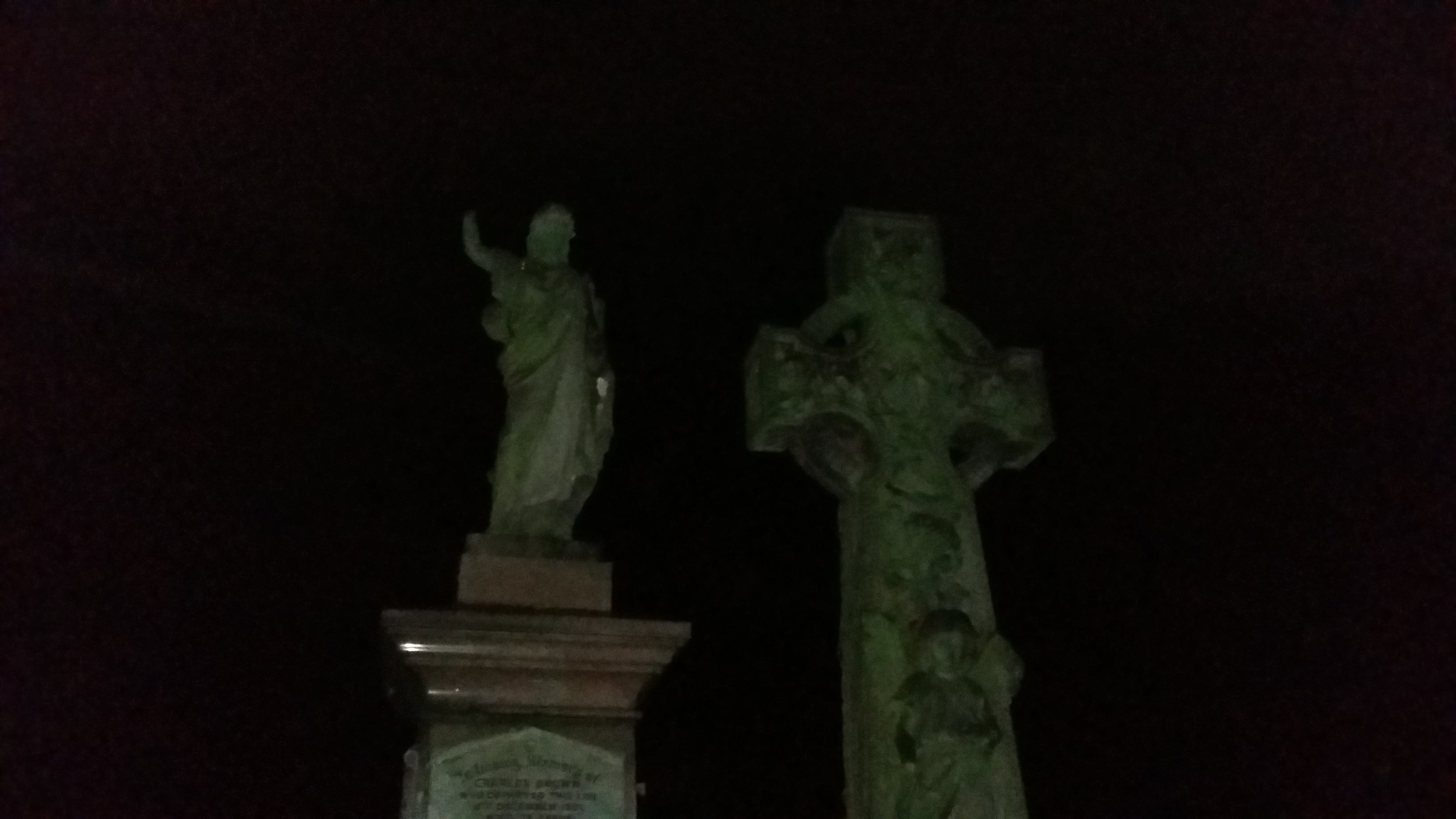 My attempt to visit each one of the Magnificent Seven cemeteries is coming to a close with my visit to Tower Hamlets Cemetery, the last of the seven to be founded in 1841. I visited one Sunday afternoon.

The address of the cemetery is Southern Grove, London, E3 4PX. The main entrance to the park is five minutes’ walk from Mile End underground station. This is the location of the Soanes Centre, where courses and educational activities take place.

The City of London and Tower Hamlets Cemetery (“Bow Cemetery” to locals) opened in 1841 after being formally consecrated by the Bishop of London. In 1966, an Act of Parliament closed the cemetery and redeclared it a park. Owned and managed by the Greater London Council until 1985, it was passed to the London Borough of Tower Hamlets. Since 1990, when the “Friends of Tower Hamlets Cemetery Park” were formed, the Borough Council and the “Friends” have worked together to promote and care for the park and run a programme of public events. It is now a designated Local Nature Reserve and a Site of Metropolitan Importance for Nature Conservation, managed by the Friends via a Service Level Agreement with LBTH Parks.

Additions have been made to the park within the last few years: the Soanes Centre, offering workshops and classes, was opened in 1993, while land including Scrapyard Meadows and Ackroyd Drive Greenlink has expanded the original area of the park. Tower Hamlets Cemetery Park is a conservation area and has several English Heritage Grade II listed monuments.

Tours of the Cemetery Park do take place every month. However, though I turned up for a tour, it looked like I was going to be the only one there, so I didn’t bother, choosing to explore myself instead. Tours sometimes focus on the history of the cemetery and sometimes on the flora and fauna to be found within; I would certainly try and go on a tour in the future if I knew it would focus on the history.

The war memorial can be found soon on entering the cemetery. From here, you can look around you and see how the city has grown up around the park.

The graves are fairly close together and some of them are quite overgrown, but I think this adds to the atmosphere.

The cemetery is smaller than others I’ve visited, and I soon reached the end, where a railway bridge allows trains to rush past. This area is overgrown and wild: more meadow than graveyard.

A quick crossing of a footpath leads you to the chalk maze and a heap of wildflowers. I could see bees and hear crickets chirping, and for a while it felt as though I wasn’t in London at all.

Back into the cemetery, I found some interesting standalone graves, including this one in memory of a three month old baby, which I found incredibly sad.

I came across this memorial to those killed in air raids during World War II. The cemetery itself was bombed five times during the war, resulting among other things to damage to both of the chapels, which were later demolished.

This grave marks the resting place of a well-known local councillor.

The Rev. David Roe is another notable burial.

This spot marks the site of the Dissenters’ Chapel.

The Anglican chapel was located here.

This cemetery doesn’t have so many notable graves, but I did like the architecture here, which in many cases was more subtle and delicate than I’ve seen before. Traditional symbols like angels, crosses and urns are common, but more unusual monuments include this little horse.

This carving of a ship on the sea is evocative and very impressive.

This sunlight-dappled tomb looks like a bath with a headless individual relaxing in it.

I love the detail on this carved drape.

This Art Deco-style gravestone is unusual and pretty.

I enjoyed my visit to Tower Hamlets. It’s as much a park as it is a cemetery but it has a great deal of atmosphere. Plenty of people seemed to be enjoying it when I was there: dog walkers, runners, and those who were just sitting and relaxing.

Would I go back?

Possibly – it would be nice to do a history tour at some point. The cemetery doesn’t have many notable burials, but it is a lovely place.

And with that, my tour of the Magnificent Seven is over. Now I need a new project…